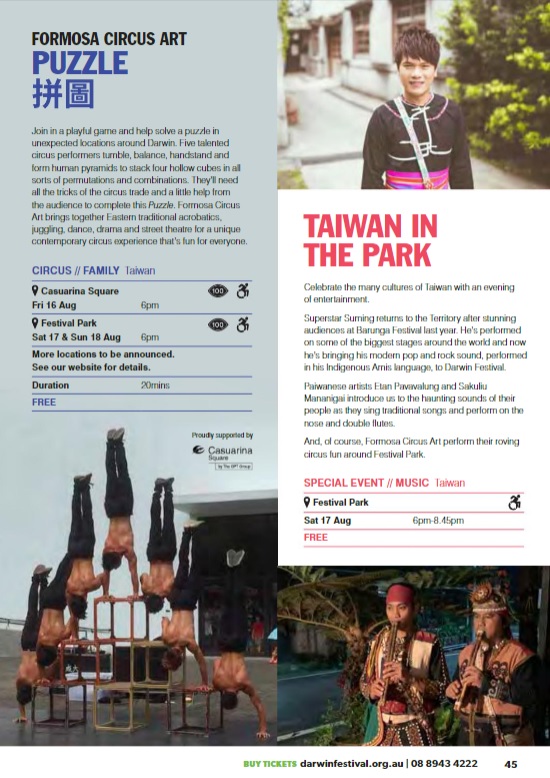 Indigenous artists and singers from Taiwan will join Australia's most northern and only tropical arts festival that was born out of the destructive wake of Cyclone Tracy in 1974 — Darwin Festival — from Aug. 9 through 24.

In cooperation with the Ministry of Culture's Bureau of Cultural Heritage, the 2019 Darwin Festival is shining a spotlight on contemporary art from Taiwan. As part of this program, Artback NT will present a showcase from one of Taiwan's most heralded performers — Paiwan dancer Aulu Tjibulangan.

Through his dance, Tjibulangan aims to integrate Walter Benjamin's concept of "Aura" with a cultural approach derived from his indigenous heritage. This inaugural Australian showing of his solo work will enthrall dance lovers on Aug. 11.

The Darwin Visual Arts Association will also play host to "Thinking in the Nature," a new solo exhibition by Paiwan artist Etan Pavavalung to express his criticism of global environmental issues, from Aug. 9 through 24. The exhibition will be accompanied by a wood-printing workshop on Aug. 24.

Pavavalung started to develop his vecik — or carved lines and patterns — style in 2009 when his mountainside Davalan Village was severely damaged by Typhoon Morakot. Seeing his fellow tribe members suffer from homesickness after relocating to prefabricated housing units at the mountain base, he began to reconstruct Paiwan culture by depicting nature, forests, and aboriginal symbols in his art creations.

Formosa Circus Art will bring a unique contemporary circus experience to the Darwin Festival by using specially customized hollow cubes as pieces of puzzle to engage both children and adults. Join the five talented performers as they pop up in unexpected locations around Darwin with their roving circus repertoire from Aug. 15 to 18.

The crowning event — Taiwan in the Park — will be held at the Rimfire Energy Bamboo Bandstand on Aug. 17. Artist-flutist Pavavalung will be joined by fellow Paiwan musician Sakuliu Mananigai in introducing to Australia the haunting sounds of their people as they sing traditional songs and perform with nose-flutes.

The nose-flute is the most iconic of the Paiwan people's traditional instruments. Composed of two bamboo pipes, one has holes and is used to play melody, while the other, lacking holes, serves as accompaniment. In Paiwan legend, the two pipes are considered two brothers bound together, creating a gentle, melodious sound that calls to mind the breathing of nature and the sighs of falling leaves.

Indigenous Amis singer Suming will also return to Australia in August after stunning audiences at the Barunga Festival last year. He's performed on some of the biggest stages around the world and now he's bringing his modern take on indigenous music to the Darwin Festival. Celebrate the many cultures of Taiwan with an evening of entertainment from Suming, Pavavalung, and Mananigai at the Taiwan in the Park program on Aug. 17.