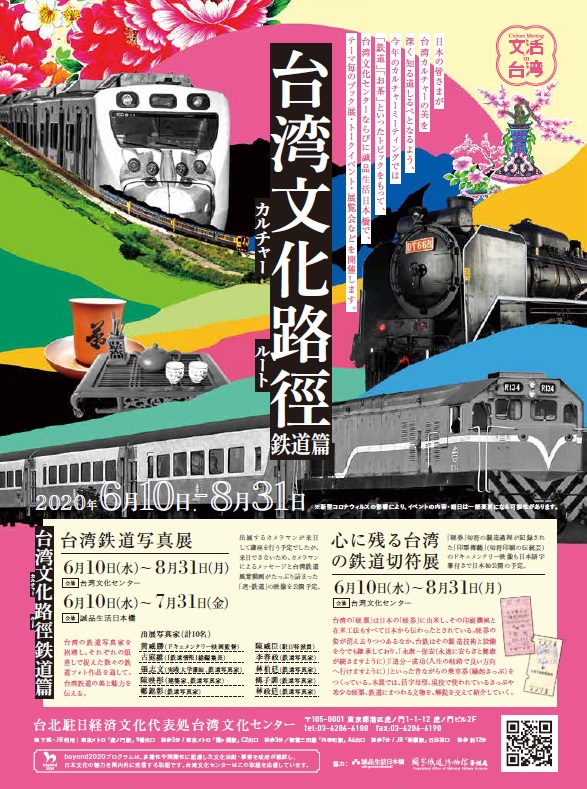 The Taiwan Cultural Center in Tokyo remarked that the Ministry of Culture has been promoting and creating different "Taiwan Cultural Routes" to showcase Taiwanese historical culture, and the "Railroad edition" will introduced in Japan for this year. The "Railroad edition" aims to present Taiwan's beautiful natural landscapes, railways, and metro scenery to Japanese viewers.

Taiwan's Representative to Japan Frank Hsieh (謝長廷) reminisced that one of his favorite childhood memories was riding on the train, eating a Taiwanese bento, and enjoying the beautiful scenery passing by the window. In addition to being a convenient transportation tool, trains act as a "treasure box" of Taiwanese cultural elements, and he looks forward for exhibition-goers to learn more about the story of Taiwan's railways, he added.

Exhibition curator Chen Wei-chen (陳威臣) mentioned that due to the coronavirus pandemic, the exhibition planning encountered many challenges at the beginning that were overcome owing to the assistance from Taiwan Cultural Center and the Eslite Life mall. He eagerly anticipates sharing Taiwan's railway stories and images with Japanese rail fans.

Also amid the pandemic, Taiwanese photographers were unable to go to Japan for the physical discussion events, therefore documentary director Huang Wei-sheng (黃威勝), Golden Harvest Awards winner and a rail enthusiast himself, was invited to helm a short film showcasing Taiwan's railroad landscapes and relaying testimonials of the participating photographers, titled "Fans of Rail Tracks (迷．鐵道)."

The two short films were published online and garnered an extremely enthusiastic response, with viewers commenting that they want to visit Taiwan after watching the clips. This will be the first exhibition to be held at Taiwan Cultural Center in Tokyo since Japan lifted their emergency declaration. Through the exhibition and online clips and images, the Taiwan Cultural Center aims to share Taiwan railroad culture and invite Japanese viewers to fall in love with Taiwan Railway.