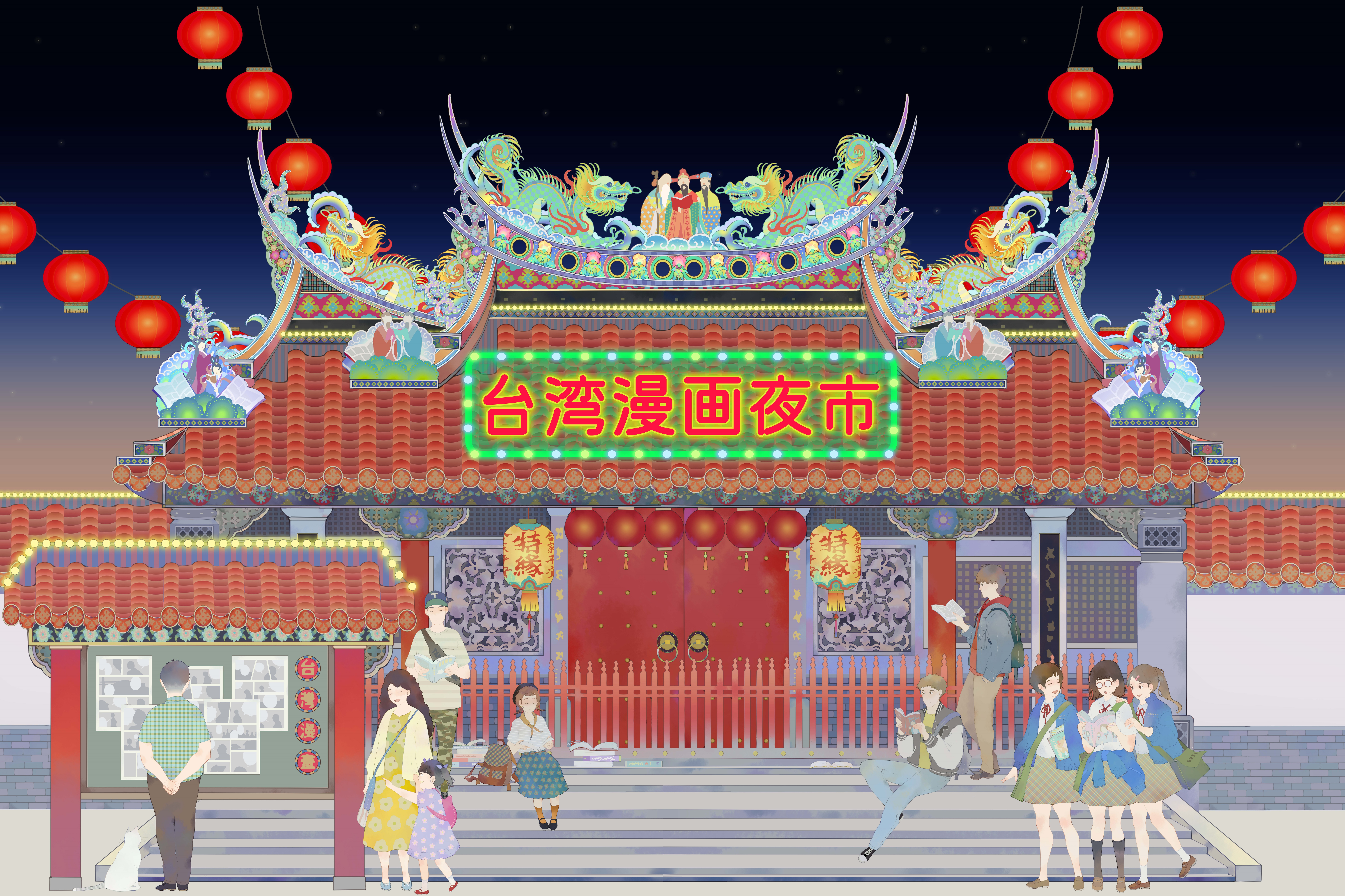 Taking a format of Taiwan's popular night market scenery, the "Taiwan Manga Night Market" exhibition which highlights illustrations and comics by 25 Taiwanese comic artists is being held at Taiwan Cultural Center in Tokyo from Nov. 20 to March, 2021.

Jointly organized by the center and Taiwan Creative Content Agency (TAICCA), an intermediary organization that promotes Taiwan's cultural content, the exhibition is part of the ongoing effort of the two organizations to promote Taiwan’s original comics in Japan.

The key visual identity design of the display is a series of illustrations by Taiwanese artist Zuo Hsuan (左萱) , who uses fine and warm strokes to draw illustrations which show night market food stalls on temple plaza frequently visited by Japanese tourists to Taiwan. The display ground is arranged like a "Taiwan Manga Night Market" for visitors to walk around and enjoy the story-telling Taiwanese original manga of various themes.

In addition to the physical event, a designated Japanese-language website will be launched to further showcase Taiwanese comics and serve as a platform aimed to advance anime, comic and games contents promotion and cultural industry cooperation between Taiwan and Japan.

The exhibition will be accompanied with a Youtube program featuring Japanese editor Shikiko Takenaka and Taiwanese comic artist AKRU. The two will be discussing a number of topics, including Taiwanese comics inspired by stories from Japan and "Boys' love," a genre of Japanese comics aimed at female readership.

Speaking at the launch ceremony on Nov. 20, Tatsuki Hirayanagi, director of Japanese licensing agency Digital Catapult Inc., said he has been promoting Taiwanese comics largely because through comics, Japanese readers will learn about places that are not introduced in Taiwan travel guides and therefore have a glimpse of Taiwanese society’s diversity.

Director Alice Wang Shu-fang (王淑芳) of the center, meanwhile, said at the event that Zuo Hsuan and another Taiwanese illustrator Gao Yan (高妍) were commissioned by the center for the first time to design event promotion materials this year and their creations have been enthusiastically received.

"A large number of Japanese readers, bookstores, and libraries have phoned for copies [of the promotional publications]," Wang said.

Such success, Wang said, demonstrates how graphic designs and comics are ideal mediums to promote Taiwan’s culture as the art forms find wide acceptance in Japan.