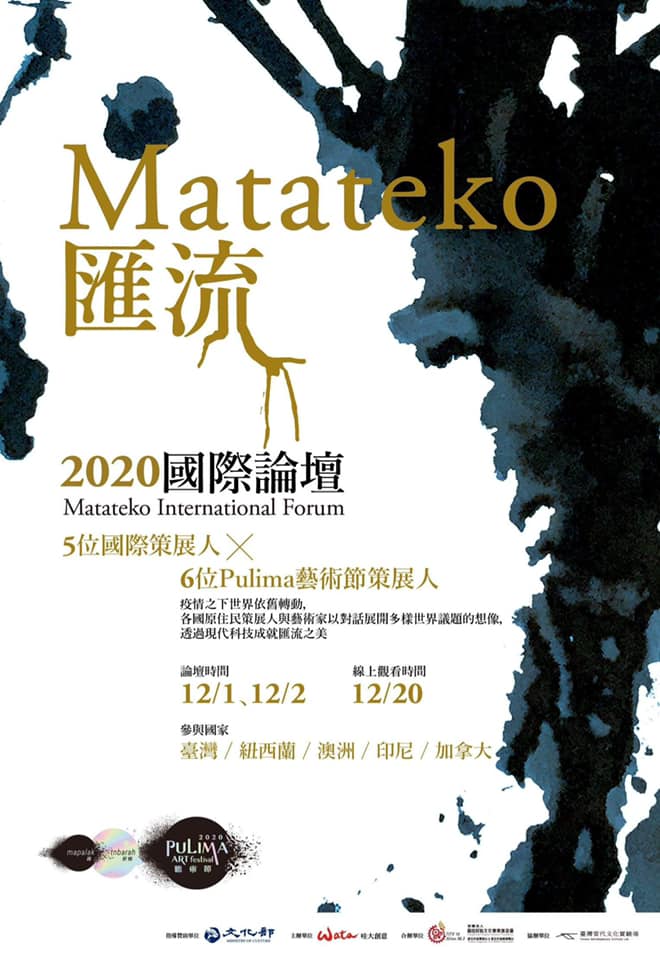 The "Matateko International Forum" organized by Southeast Asia Advisory Committee member Nakaw Putun was held online on Dec. 1 and 2. Indigenous curators from Indonesia, Australia, and New Zealand, in addition to six curators of the Pulima Art Festival, a Taiwanese festival held biannually to present Indigenous contemporary arts, were invited to share their curatorial experiences and to discuss future collaboration possibilities. For those interested in viewing the discussions, please click here.

The international forum is one of the projects for cultural exchange and cooperation in Taiwan proposed by members of the Southeast Asia Advisory Committee. Earlier this year, the Ministry of Culture, for the first time, invited committee members to propose cultural exchange projects under the "Cultural Exchanges and Collaborative Projects between (the Regions of) South East Asia and Taiwan (新南向海外交流專題計畫)." It is planned that implementation and achievements of the selected projects will be announced at the annual meeting of the committee next year.

The 2020 Matateko International Forum was initiated by Taiwanese curators Gong Jow-Jiun (龔卓軍) and Nakaw Putun. Using modern technology to connect indigenous curators from Australia, New Zealand, Indonesia and Canada, the online forum with simultaneous interpretation enables curators from different countries to conduct real-time and profound discussions regarding current developments of the indigenous arts in their respective countries, laying the groundwork for future collaborations.

The curators in naming the international forum uses "Matateko," which means "confluence" in the Amis language, to indicate the aims to bring indigenous artists of different ethnicities, cultures and languages together through dialogues and to transcend cultural boundaries by means of art, resembling a confluence where streams merge into one.

According to Gong Jow-Jiun and Nakaw Putun, the idea of organizing the Matateko International Forum was inspired by "aabaakwad" (meaning "it clears after a storm"), a key event of the Indigenous-led 2020 Biennale of Sydney (BoS), titled "Nirin." The two curators were invited to attend the four-day program of in-depth dialogues about global Indigenous arts practice in forms of music, performance, video recording, poetry and talk show, featuring artists from 12 countries. Impressed by the the passion and vigor displayed at the indigenous-led conversation "aabbakwad," the two curators started to prepare for the 2020 Matateko International Forum upon returning to Taiwan.

On the first day of the forum, the six curators from the Pulima Art Festival shared their curatorial projects.

"Action Intuition" by Kaynga (陳豪毅) explores the attitude towards existence; "Mtukuy" by Dondon．Hounwn (東冬‧侯溫) and Terudj Tjucenglav’s (得陸‧鳩浙恩澇) "Iamaljeng" profoundly reflect on the importance and challenges of cultural inheritance; Miru Xiumuyi's (古羅文君) "The Body of Forking Paths" brings the various performing arts back to the tribes, highlighting the ups-and-downs of path leading to self-identity; Talum Isbabanal's (杜逸帆) "Truku of Tomorrow: Dgaiyaq Uking is Vanishing," and Labay Eyong's (林介文) "Dungku Asang" utilize video and weaving art to bring attention to the impact of social environment and colonialism on the indigenous tribes.

On the second day of the forum, Wanda Nanibush, a co-curator of "aabaakwad," shared the approach to organizing an international gathering that features indigenous peoples, through the adoption of an activity-based format that breaks away from mainstream conventions.

Through this intriguing dialogue that joins together Taiwan, New Zealand, Australia, Canada and Indonesia, countries of both hemispheres, Taiwanese curators have reached consensus with their colleagues from other countries for further collaboration. The event also called attention to the contributions of contemporary indigenous arts to the world.