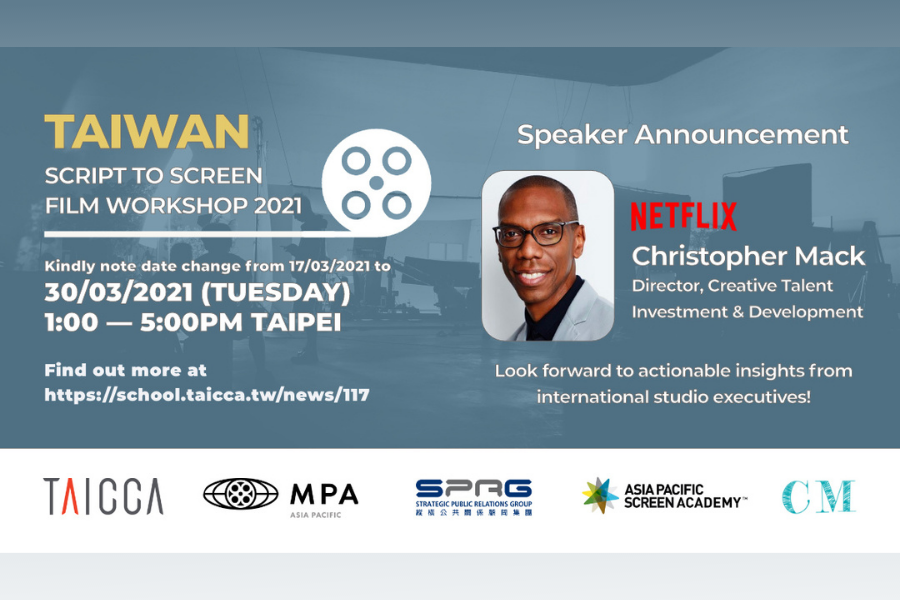 The Taiwan Creative Content Agency (TAICCA) will be hosting a workshop on March 30 from 1pm to 5pm at Le Méridien Taipei. Co-organized by TAICCA and MPA-Asia Pacific, the workshop, which is divided into two sessions, "Motion Picture Association (MPA) Film Workshop" and "Pitching Competition," will evolve around the theme of "script to finished product" of a film.

For the "MPA Film Workshop" session, two lecturers: one appointed by Netflix and the other an expert on the six major film studios, will be invited to expound on the screenwriting process within the American film industry, the art of narrating a story through audiovisual means, as well as the artistic quality and marketability of a screenplay.

The "Pitching Competition" will proceed with experts on the film industry, two from abroad and two from Taiwan, to select the winner out of the given screenplay proposals who will participate in a film course set to take place in Los Angeles this November.

The agency hopes that members of Taiwan's audiovisual industry who participate in the workshop may learn and profit from the experience, in addition to providing an opportunity for Taiwanese industry professionals to interact with those from abroad.

Only experienced members of Taiwan's audiovisual industry will be eligible to attend the workshop. To ensure best learning experience, the MPA Film Workshop will only accept up to 50 attendees and among the attendees, only five will be selected for the "Pitching Competition" session. Applicants are required to provide English and Chinese resumes, including details of past work experience as screenwriters for movies or films.