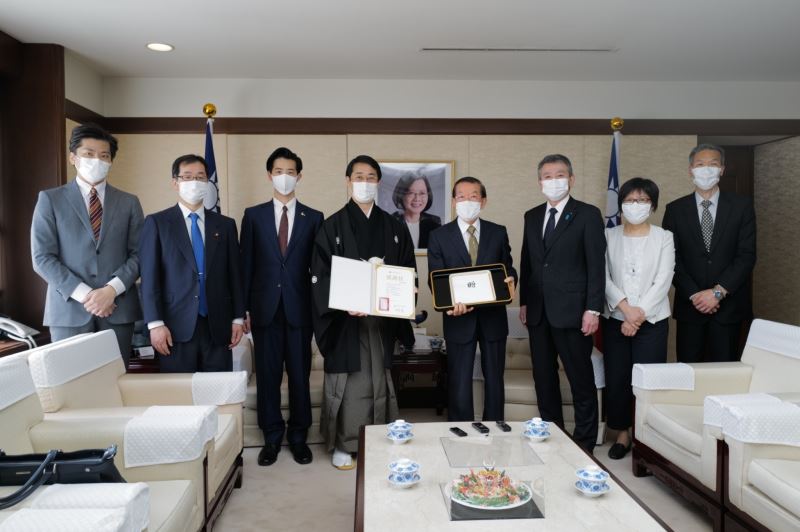 Japan's traditional Noh dance-drama theatre "Gasho-En (瓦照苑)" donates 300,000 Japanese yen (about NT78,000) to Taiwan's National Culture and Arts Foundation (NCAF), as a gesture of gratitude for the donations of surgical face masks from Taiwan amidst the COVID-19 pandemic, and to promote cultural exchanges between the two nations.

In April last year, Taiwan donated two million face masks to Japan, which has been hard hit by the outbreak of the coronavirus, as part of the island’s efforts to show it can help the world combat the pandemic.

Representative of Gasho-En, Takuji Ueda (上田拓司) met Hsieh Chang-Ting, representative of the Taipei Economic and Cultural Representative Office in Japan, on Apr. 7. At the meeting, Takuji, who is also the designated preserver of Japan's intangible cultural property, thanked Taiwan and showed his interest in having in-depth exchange with Taiwanese art and cultural groups in future.

With the assistance of the Taiwan Cultural Center in Japan, NCAF agreed to accept the donation, which will be used to provide subsidies for Taiwanese art and cultural workers.

On behalf of NCAF, Hsieh accepted the donation and presented a certificate of appreciation from the foundation. Additionally, Hsieh also instructed Taiwan Cultural Centre to strengthen the bilateral cooperation in the field of traditional arts between Taiwan and Japan in future. He hopes that through this donation, it could be an opportunity for subsequent multi-cultural exchange for both countries.

Gasho-En is a modern Noh theatre located in Nishinomiya, Hyogo, Japan. One important mission of the theatre is to familiarize people with Noh. Since its launch in 1995, it has organized biannual Noh-related performances and regularly holds one-day classes. The artistic quality of this project has been recognized by such awards as the Excellence Award of National Arts Festival from Japan’s Agency for Cultural Affairs.