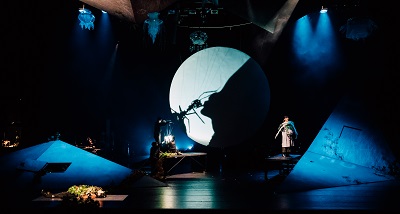 The Taiwanese-German co-production "On the Edge of Reality (穿越真實的邊界)" by The Puppet and Its Double (無獨有偶工作室劇團) and Germany's figuren theater tübingen will have its premiere at the National Taichung Theater on April 17 and 18.

"On the Edge of Reality" is composed of multiple stories detailing issues in contemporary life, such as anxieties caused by communication barriers, explosion of information and powerlessness in the face of the status quo.

In the show, the actors share the social contact dilemma they encounter and their desire to escape from reality. The stories include bizarre incidents, such as the unexpected pregnancy of a Russian astronaut, and worrisome situation of nurturing the next generation, described through humorous narration.

Cheng Chia-yin (鄭嘉音), artistic director of The Puppet and Its Double, indicated that this joint production drew inspiration from both Eastern and Western mythical accounts such as "Classic of Mountains and Seas (山海經)," "Taiwan Folklore Creatures: Fantastic Notes on the Island over 300 Years (妖怪臺灣：三百年島嶼奇幻誌)," and "Histoires naturelles des animaux imaginaires" in its puppet designs.

Cheng further indicated that the show aims at conveying the various issues that modern people might face in life, through nameless fantastical creatures, which are embodiment of unspeakable sorrow and fears.

Frank Soehnle, artistic director of figuren theater tübingen, was participating in rehearsals in Taiwan in 2019, but due to the current pandemic, he has been working remotely. He pointed out that though there were times he was unable to understand his Taiwanese co-workers, they were able to communicate in a theatric language filled with visuals, and thus, interaction was made possible.

Soehnle noted that when Western puppetry started to seek after contemporary expressions, the traditional forms were left behind and forgotten. During the production of "On the Edge of Reality," he discovered that Eastern puppetry, which has inherited and incorporated traditional forms, displays much more richness.

Audience will have the chance to get to know the puppets of mythical creatures before the show begins, by scanning a QR code for AR contents on the installation at the lobby of the National Taichung Theater.