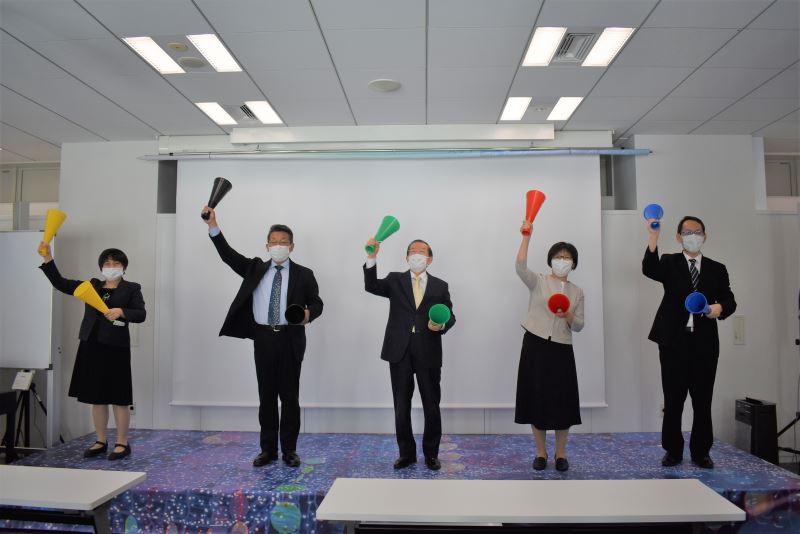 An exhibition focused on the athletic career of Chang Hsing-hsien (張星賢) (1909 – 1989), the first Taiwanese athlete participating in the Olympic Games, was officially opened at the Taiwan Cultural Center in Tokyo on April 15.

Jointly sponsored by the Taipei Economic and Cultural Office (TECO) in Japan, Chiba Prefecture's National Museum of Japanese History, and the National Museum of Taiwan History (NMTH) in Tainan, the exhibition is focused on historical materials related to Chang Hsing-hsien, a Taiwanese athlete who was active during the Japanese colonial period, and participated in the 1932 Los Angeles Olympics and the 1936 Berlin Olympics, running for Japan.

At the opening ceremony, Taiwan's Representative to Japan Frank Hsieh (謝長廷), holding a five-color cheering stick, with the colors same as the colors of the Olympic rings, cheered for Taiwanese and Japanese athletes participating in the Olympic Games. As a token of support to Taiwan’s pineapple planters, the exhibition organizer prepared Taiwan-produced pineapple cakes as souvenirs.

Hsieh pointed out that on the occasion of the 2021 Summer Olympics opening in Tokyo, the exhibition shows in retrospect the athletic career of Chang Hsing-hsien (張星賢), who first left Taiwan for Tokyo and then proceeded to the world’s sporting scene. In addition to showcasing the determined spirit of the Taiwanese people, the exhibition also exemplifies the precious friendship between Taiwan and Japan, he added.

Director of the National Museum of Japanese History Nishitani Masaru shared his exchange experiences with the National Museum of Taiwan History (NMTH) and National Cheng Kung University (NCKU) in Tainan, and expressed his hope that academic and exhibition collaborations will continue with the aim of enhancing our understanding of history as we move into a new era.

According to TECO in Japan, the exhibition featuring Chang Hsing-hsien is part of the exhibition "Body and Modern Sport History in East Asia" at the National Museum of Japanese History. From Jan. 26 to March 14, the Japanese museum presented the exhibition "Running through East Asia: Sports in the Modern Age." TECO in Japan has coordinated with the museum to loan historical materials, including photos, letters and diaries, related to Chang's participation in the 1932 Olympics in Los Angeles and the 1936 Olympics in Berlin, and to display at the Taiwan Cultural Center in Tokyo.

TECO Japan states it is hoped that the exhibition will help people better understand Taiwan's sports and historical development and the spirit of sportsmanship unaffected by time and space or a pandemic. TECO Japan also took the opportunity to show support for athletes from Taiwan and Japan who are actively preparing for the competitions and to convey the positive energy brought about by friendship between the two countries.

The exhibition on "Body and Modern Sport History in East Asia" is expected to take place at the NMTH in Tainan from July 14 to Nov. 7 this year.