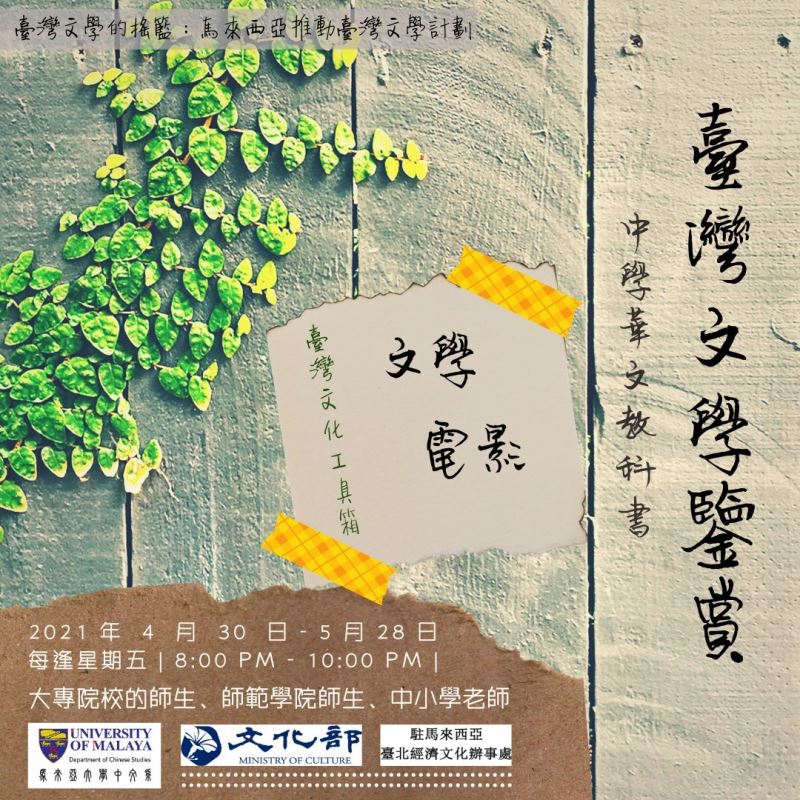 The first-stage “Taiwanese literary appreciation class,” featuring a series of online lectures, will be held on April 30, May 7, May 14, May 21, and May 28, in the evenings from 8pm to 10pm.

Combining MOC’s Literature Toolkit and Taiwan Cinema Toolkit, as well as Chinese textbooks from Malaysian junior and independent high schools, contents of the promotion of Taiwanese literature project will be introduced in a systematic way, allowing Malaysian teachers, students of Chinese language studies, and the public to learn and experience Taiwan’s contemporary literary scene, and spread its influence in Southeast Asia.

The “Taiwanese literary appreciation class” is conducted in two stages—the first from April to May and the second from August to September—each stage with five online lectures. Writers and scholars from Taiwan and Malaysia are invited to introduce works of Taiwanese writers and their social milieu, so that readers in Malaysia can learn the historical background of the development of Taiwanese literature. It is expected that the project will help promote literary exchange and raise the visibility of Taiwanese literature and publications in Southeast Asia.

The online lectures will also be accompanied by “Taiwan Cinema Toolkit” events, with selected Taiwanese films from MOC’s Taiwan Cinema Toolkit which correspond with the contents of the lectures. Established Malaysian theater professional Chen Wei-guang (陳偉光) is invited to conduct film guides.

It is hoped that, through a complementary approach of literature and film, coupled with multidimensional analysis, the lectures can provide audience a deeper understanding of the authors’ writing techniques, the humanistic ideals behind them, and the effects of social backgrounds upon their works.