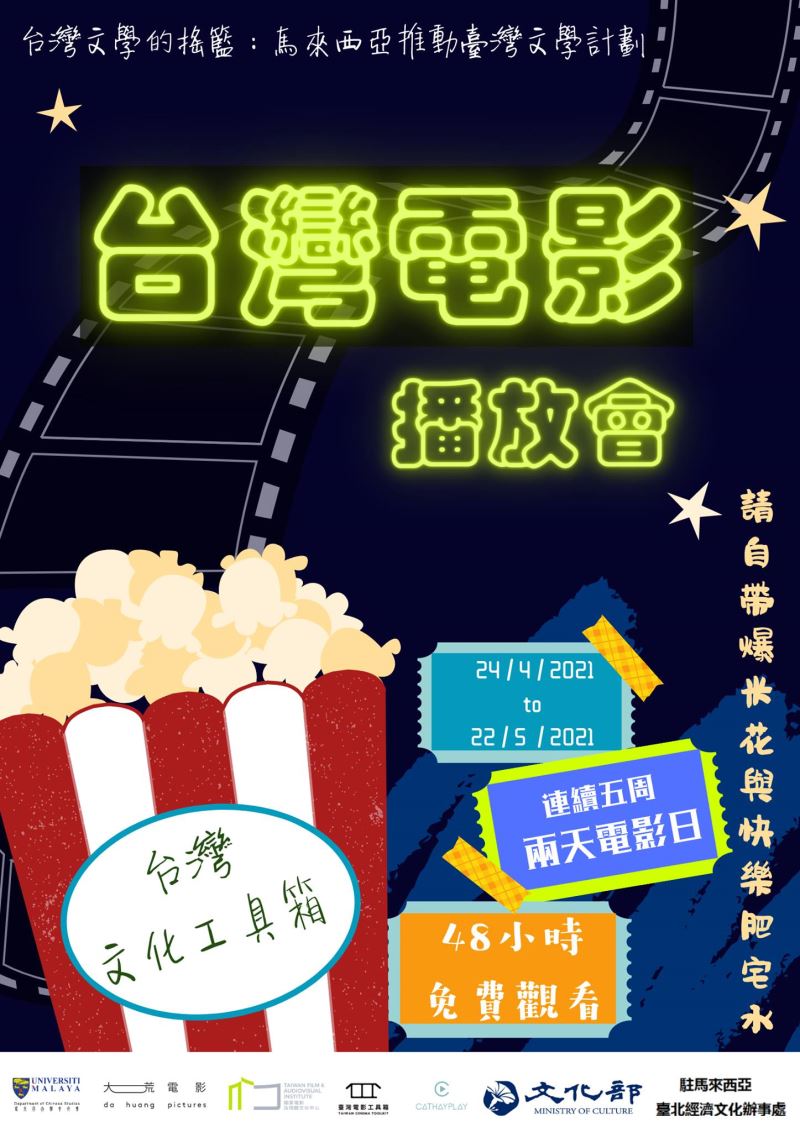 The Taipei Economic and Cultural Office (TECO) in Malaysia and the SeaShorts Film Society in Malaysia has co-organized a Taiwan-Malaysia exchange program for the 2021 SeaShorts Film Festival. The first part of the program, "Taiwan Cinema Toolkit (TCT) Screening Guide (臺灣電影工具箱電影放映導讀會)," was launched on April 24 and will last until May 28.

Taiwan Cinema Toolkit (TCT) is an overseas promotion project supported by the Ministry of Culture and administered by Taiwan Film and Audiovisual Institute. Every year, TCT selects some of the best Taiwanese films for a variety of non-profit screenings abroad.

"Taiwan Cinema Toolkit Screening Guide," film screenings accompanied with film guides conducted by renowned film critics, is combined with lectures from the "Taiwan Literary Appreciation Class (臺灣文學鑑賞班)" presented by the Department of Chinese Studies of the University of Malaya.

With the support of the Taiwan Film & Audiovisual Institute (國家電影及視聽文化中心), Tan Chui-mui (陳翠梅), renowned Malaysian director and founder of the SeaShorts Film Festival, has selected five films with themes corresponding to the topics discussed at the "Taiwan Literary Appreciation Class," which include "Out/Marriage (失婚記)," "Somewhere I Have Never Travelled (帶我去遠方)," "Lichao (離巢)," "Cloudy (順雲)," and "To My Dear Granny (親愛的奶奶)."

Renowned Malaysian film critics are invited to conduct film guides, in hope of providing insights into Taiwan's social context and humanistic thought through the images and allowing those attending the program to learn and appreciate the essence of Taiwan's cinema and literature, thus deepening deepening Taiwan’s influence in the Southeast Asian region.

Screening of two films was held in late April and early May. Theater professional Chen Wei-guang (陳偉光) on April 30 conducted the film guide for "Out/Marriage," which was screened on April 24-25, and the film guide of "Somewhere I Have Never Travelled," screened on May 1-2, was conducted by Chen Wei-guang (陳偉光) and Taiwanese writer Lin Mu-min (林牧民) on May 7. The two film guide events attracted respectively 267 and 263 online viewers, with enthusiastic participation in the Q&A sessions.