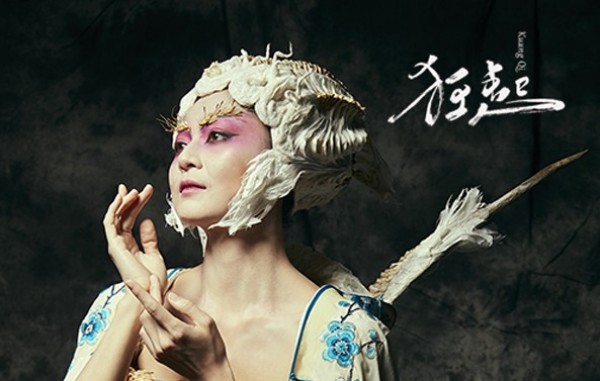 M.O.V.E. is an artistic platform exploring the aesthetics of physical theater through movement, observation, and experimentation. The artists were part of a five-troupe delegation celebrating Taiwan's tenth year of participation at OFF Festival d'Avignon last year.

"Kuang Qi” uses the lady archetypes of traditional Chinese opera to delve into female desire and its transformation. What if the handsome man that Du Li-niang has always dreamed in countless renditions of "The Peony Pavilion” was actually a woman in man's disguise? Would her desires and repression remain the same?

M.O.V.E.'s musical theatre further detaches from the norm by removing the traditional notations of gongs and drums, choosing instead a refreshing dialogue performed by percussionists from both western and eastern ensembles. The masculine dynamics represent the feminine struggle under social conventions, while the fluid soundscape signals burgeoning desire.

"Kuang Qi” will be offered in four performances from Nov. 15 through 17 at Sodsai Pantoomkomol Centre for Dramatic Arts, as part of the inaugural "Bangkok International Performing Arts Meeting” organized by the Chulalongkorn University's Department of Dramatic Arts.

Pawit Mahasarinand, chair of Chulalongkorn's Department of Dramatic Arts and member of Taiwan's Southeast Asia Advisory Committee, summarized his decision of choosing M.O.V.E. for the inaugural showcase in Bangkok with two words — "interdisciplinary” and "experimental.”

Calling "Kuang Qi” the "highest artistic risk” that M.O.V.E. Theatre has ever taken, Mahasarinand stated: "I personally admire artists who do not just sit in their comfort zone and create works in the same old recipe that they're certain their audience will like.”

The Thai debut of "Kuang Qi” is made possible with support from the Ministry of Culture's branch office in Kuala Lumpur, which began operations last July and facilities cultural exchanges between Taiwan and Southeast Asia.

More information on the Nov. 15-17 performances can be found at the Bangkok Theatre Festival's website here.