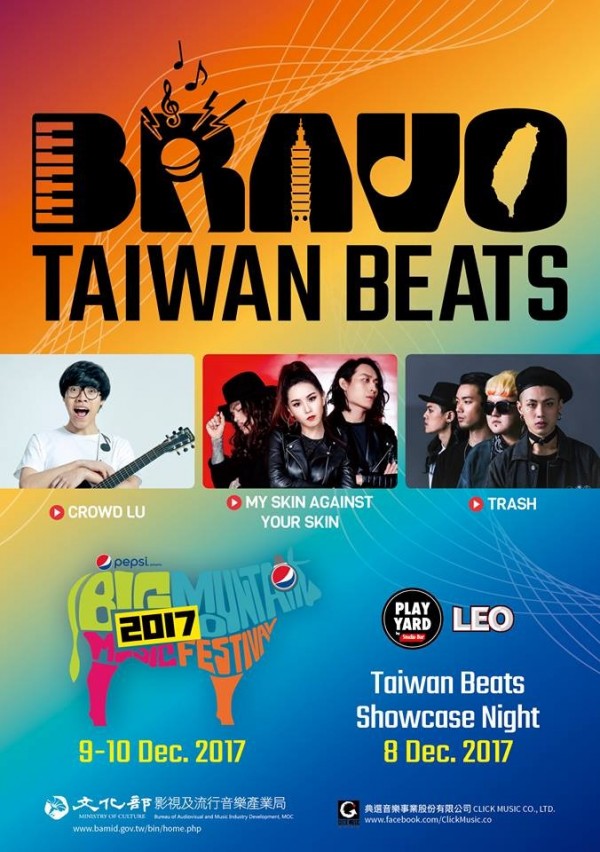 Music Matters, which will take place in Singapore from Sept. 9 through 13, is a leading music festival in the Asia-Pacific region. Each year, it offers concerts and conferences to bring together music and digital professionals as well as bands from around the world.

For several consecutive years, the Bureau of Audiovisual and Music Industry Development has sent a Taiwan delegation to join Music Matters. Previous artists include MC HotDog, who revived interest in Chinese hip-hop music in Singapore. Thus, this year's upcoming performance by rapper PoeTeK has been highly anticipated by local media and fans.

In addition to the main festival performance, a Taiwan Night gig will be presented following Music Matters on Sept. 12. Moreover, four representatives from Taiwan's music industry will share the current situation and future prospects of Taiwan's digital music industry in a forum titled "Gateway to Taiwan.”

The Thailand-based Big Mountain Festival, on the other hand, will feature Crowd Lu, TRASH, and My Skin Against Your Skin. The lineup will also be sharing a stage with popular Thai bands at an additional Taiwan Night in Bangkok.

In recent years, Crowd Lu has become a hit singer with his unique singing style and performance in concerts and TV dramas. He has also become popular among music festivals around the world with his ability to provide upbeat concert atmospheres.

TRASH, an alternative rock band that has evolved in terms of music style and technique over the years, has astonishing international credentials, while My Skin Against Your Skin is another Taiwan-based band popular at overseas music festivals.

All participating acts expressed their excitement at a Sept. 5 press conference in Taipei, noting that they have been exploring how to communicate with foreign audiences through Taiwanese music.

Moreover, to expand the regional development and markets of Taiwan's pop music, the Golden Melody Awards & Festival partnered with Big Mountain Festival this year to have recommended artists perform in each nation.

Balai (巴賴), a Paiwan singer who was named Best Aboriginal Singer at the 27th Golden Melody Awards with his debut album, will perform in Thailand on Dec. 9. BMMF, on the other hand, has selected Thai folk music band My Life as Ali Thomas to perform at the next Golden Melody Awards & Festival.

BAMID Director Hsu Yi-chun (徐宜君) noted that as Taiwan music leads the Chinese-language music market, it should have the ability to innovate and be insightful when faced with the global trend of digital and diverse applications of music. It is great to see that Taiwanese artists and bands have elevated themselves as pioneers to meet such trends, she added.

Hsu encouraged Taiwanese bands to shine on stage in Singapore, Thailand, and other countries, and bring back their experiences to introduce new energy and ideas to Taiwan and the Chinese-language music scene.