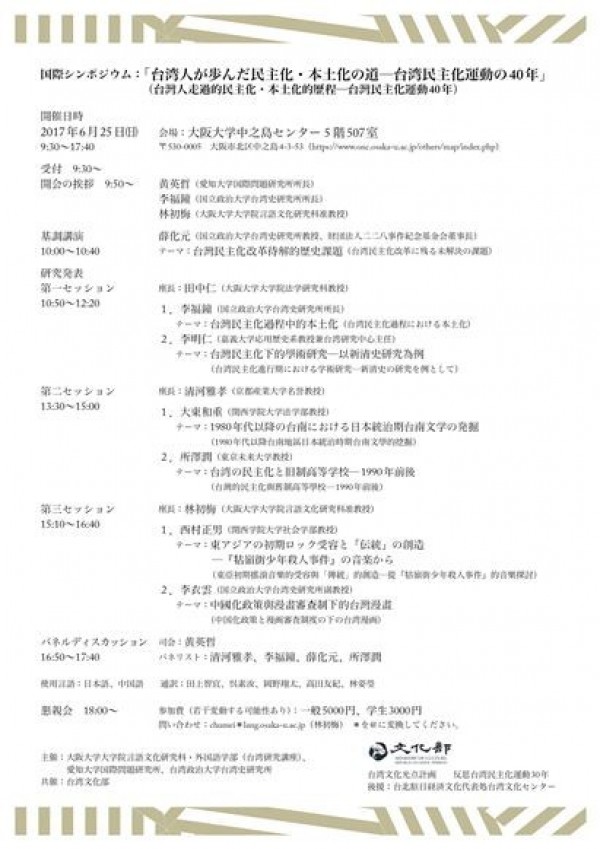 The Ministry of Culture's Spotlight Taiwan Project will hold seminars on the democratization of Taiwan in collaboration with several Japanese universities this summer.

Titled "Contemplation on the 30 Years of Taiwan's Democratization,” the seminars will systematically explore the development of Taiwan culture and academics before and after the lifting of martial law, and further highlight the uniqueness of Taiwan through discussing issues pertaining to the Middle East and mainland China.

The seminar discussed cultural diversity and its value in Taiwan before and after democratization from the perspective of history, literature, pop music, and manga. The seminar attracted around 100 audiences, including a couple of scholars from Taiwan.

Director Chu Wen-ching (朱文清) of the Taiwan Cultural Center in Tokyo noted that it would be hard for young Taiwanese people - who enjoy extensive freedom of speech and information - to imagine life under martial law 30 years ago.

After the lifting of martial law in 1987, Taiwan has become a true democratic country following the amendment of various laws, congressional overhaul, and electoral reforms. As a nation with universal suffrage, Taiwan culture will be continuously enriched in an environment that does not limit thought or creativity, added Chu.

The Spotlight Taiwan Project is an initiative that invites foreign universities and institutes to become Taiwan's cultural partners by introducing the culture and arts of Taiwan through participatory events.

Following Osaka University, more seminars will be held at Aichi University and Waseda University in July to introduce different aspects of Taiwan culture from the perspective of democracy.