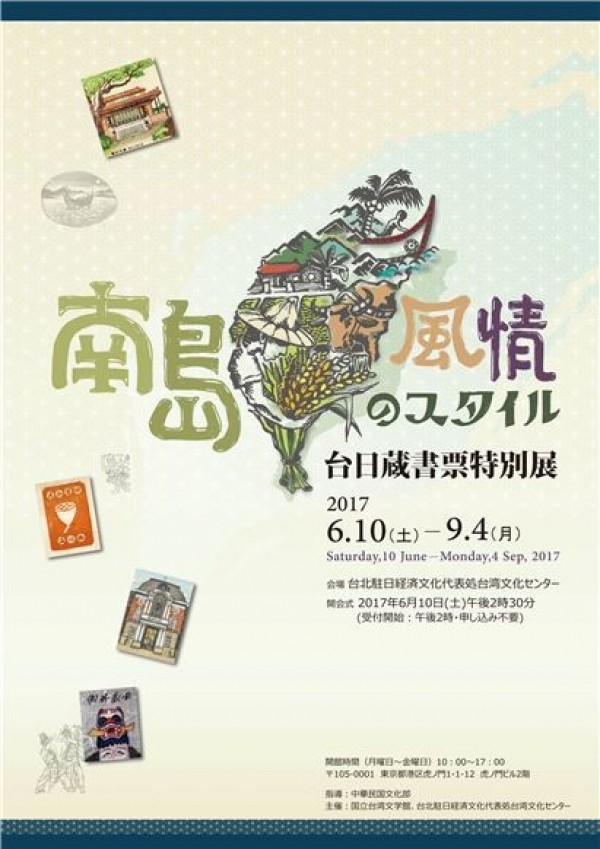 A special exhibition featuring the history of bookplates in Taiwan will be on view at the Taiwan Cultural Center in Tokyo from June 10 through Sep. 4.

With origins from 15th-century Germany, a bookplate is a decorative label pasted on the inside of a book's front cover to indicate ownership. Bookplates are similar to the exquisite small print of Chinese ownership stamps, and are also known as "printed pearls (版畫珍珠),” "treasure on paper (紙上寶石),” and "butterflies of the book (書中蝴蝶).”

The history of bookplates in Taiwan dates back to the Japanese colonial era, when scholars such as Sugiura Kazunari (杉浦和作), Toru Kawamura (河村徹), Tateishi Tetsuomi (立石鐵臣), and Mitsuru Nishikawa (西川滿) advocated the use of bookplates, which in turn influenced the arts, culture, and literary output of Taiwan.

The exhibition will offer insights on the history of such bookplates and their relations with Taiwan literature. It will also showcase rare bookplates collected by the National Museum of Taiwan Literature (NMTL) in Tainan City.

The museum's collection includes bookplates of different themes, such as the flying fish and aboriginal tatala boat of the Tao people on Orchid Island, as well as religious imagery pertaining to Mazu and the Tiger God (Hu Ye).

Visitors to the exhibition will also get to see bookplates featuring historic monuments such as the Tainan Train Station, Tainan Prefecture Hall (which currently houses the National Museum of Taiwan Literature), and Fort San Domingo.

Deputy Representative Kuo Chung-shi (郭仲熙) of the Taiwan Cultural Center in Tokyo noted that because bookplates embody cultural and artistic elements, they have preserved the social phenomena of Taiwan and Japan at that time.

Director Liao Chen-fu (廖振富) of NMTL added that six featured bookplates once belonged to the late Nishikawa, who was an important driving force behind bookplates in Taiwan.

Born in Japan, Nishikawa relocated and stayed in Taiwan for more than three decades. He released a poetry collection called "Mazu Festival (媽祖祭)” and launched the magazines of "Magnificent Island (華麗島)” and "Culture & Art Taiwan (文藝臺灣)” to show his affections for Taiwan.

"Taiwan-Japan Bookplates Exhibition” will run in Tokyo through Sept. 4.