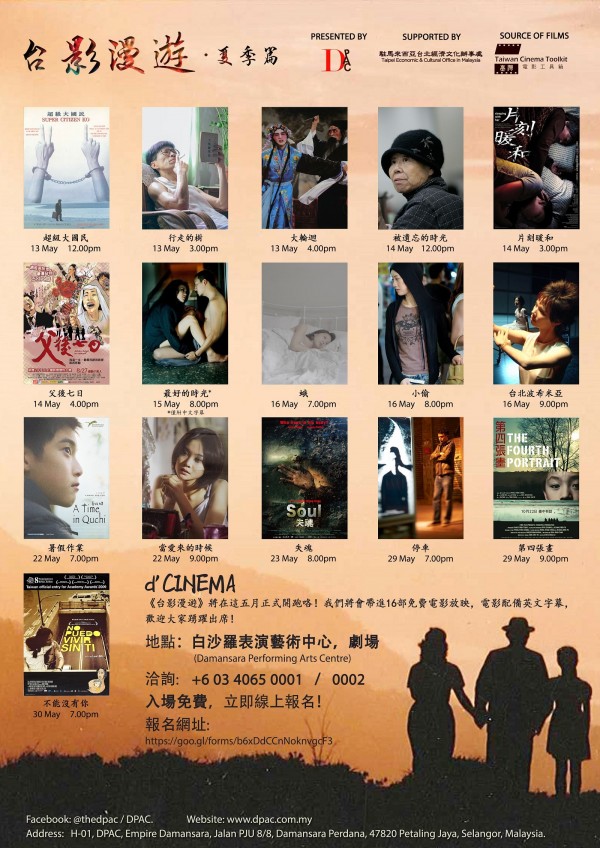 Sixteen films from Taiwan will be presented in Kuala Lumpur from May 13 through 30 to introduce veteran Taiwanese filmmakers to Malaysian cinemagoers - free entry for all!

The films will also be shown in thematic groupings, starting with the White Special segment on May 13 covering the era of martial law on Taiwan between 1949 and 1987, which is better known as the reign of "White Terror” today.

Films like "Super Citizen Ko (超級大國民)” by Wan Jen (萬仁), "Those Days When We Were Young (行走的樹)” by Wang Shau-di (王小棣), and "The Wheel of Life (大輪迴)” - a joint venture by King Hu (胡金銓), Lee Hsing (李行), and Pai Ching-jui (白景瑞) - will explore the 38-year-long period of political suppression and ensuing dissident movements.

Other themes include a Parents Day Special on May 14 encompassing three films respectively tackling the difficulties of dementia, the life of a live-in caretaker, and the bereavement of a child dealing with the loss of an emotionally distant parent.

Last but not least, a special segment on May 16 will turn the focus towards short films and documentaries made in Taiwan. All sixteen films are admission-free and complete with English subtitles. The full screening schedule can be found here.