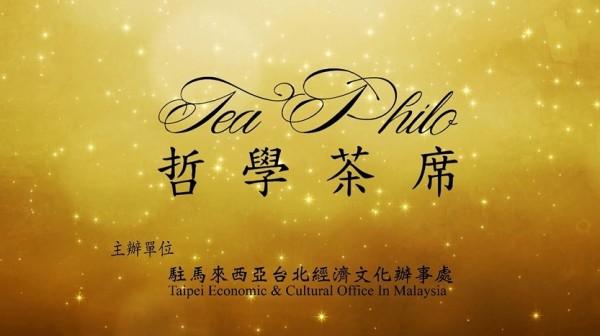 The Taipei Economic and Cultural Office in Malaysia has curated a monthly cultural salon series comprising of studies in areas such as philosophy, arts, and culture. Outstanding Taiwanese artists and groups will be invited to share their experiences in Malaysia starting April 30.

Fruitful discussions are most likely to originate from a group tea session, and this is the core idea with which the "Tea Philo” salon series were developed. Between April and November, dynamic cultural exchanges enhanced by the mind-clearing effects of tea will be carried out between the speaker and members of Taiwanese and Malaysian art circles.

Entrepreneur Jou Yi-cheng (周奕成) will kick off the series on April 30 by discussing his cultural management experiences from preserving the historic streets of Taipei's Dadaocheng District. "Commercial Revitalization and Cultural Renaissance of Historic Street Districts” will be hosted by the Purple Cane Cultural Centre in Shaw Parade.

The second session of the series will take place on May 21 and feature Jerry Yen (顏瑋志), another Taiwanese entrepreneur who found his roots in Dadaocheng. The founder of CAMPOBAG created a shared platform for young artists, international resident artists, and members of the local community to thrive under the umbrella of social corporate responsibility.

More events will be announced soon.

"Tea Philo” events are free of charge, but pre-registration is required. Interested parties can contact the Cultural Division of the Taipei Economic and Cultural Office in Malaysia (+6016-673-5938) or public relations specialist Jenching Lin (+6031-610-630, jc.lin@moc.gov.tw).