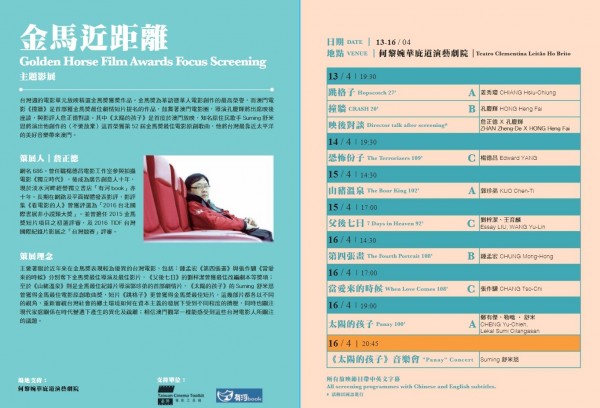 A special selection of cinematic productions that have been lauded by the Golden Horse Awards, one of the most prestigious film awards in the Chinese-speaking community, will be screened from April 13 through 16 at Clementina Leitao Ho Brito Theatre in Macau.

Curated by film critic Dennis Chan (詹正德) and encompassing films that have made a splash at the annual Golden Horse Awards, the Macau screenings are expected to provoke audiences to rethink the value of one's homeland.

One of the most anticipated movies is "Crash (撞牆),” the first film from Macau to ever be nominated for the Golden Horse's Best Short Feature Film. Directed by up-and-coming filmmaker Hong Heng Fai (孔慶輝), the film is about a man whose life is overturned overnight after appealing to a social networking website to look for his missing mother.

Rounding up the list are "The Boar King (山豬溫泉),” the first feature directed by Kuo Chen-ti (郭珍弟) and the recipient of the 2014 Golden Horse Best Documentary Award, and "Panay (太陽的孩子),” a film made from an indigenous perspective that was recognized for Best Original Film Song.

These films re-scrutinize the ever-changing Taiwan society following the development of capitalism and its effects on familial relations from different perspectives.

Curator Chan and director Fai will hold a post-screening forum on April 13. Suming (舒米恩), an Amis singer and 2008 Best New Performer for his breakthrough role in "Hopscotch,” will also bring his award-winning song "Aka pisawad (不要放棄)” to Clementina Leitao Ho Brito Theatre on April 16.

Co-organized by the Taipei Economic and Cultural Office in Macau and the Ministry of Culture's Kwang Hwa Information and Culture Centre, the "Golden Horse Film Awards Focus Screening” program is part of the 2017 Taiwan Festival in Macau taking place from April 6 through 17.