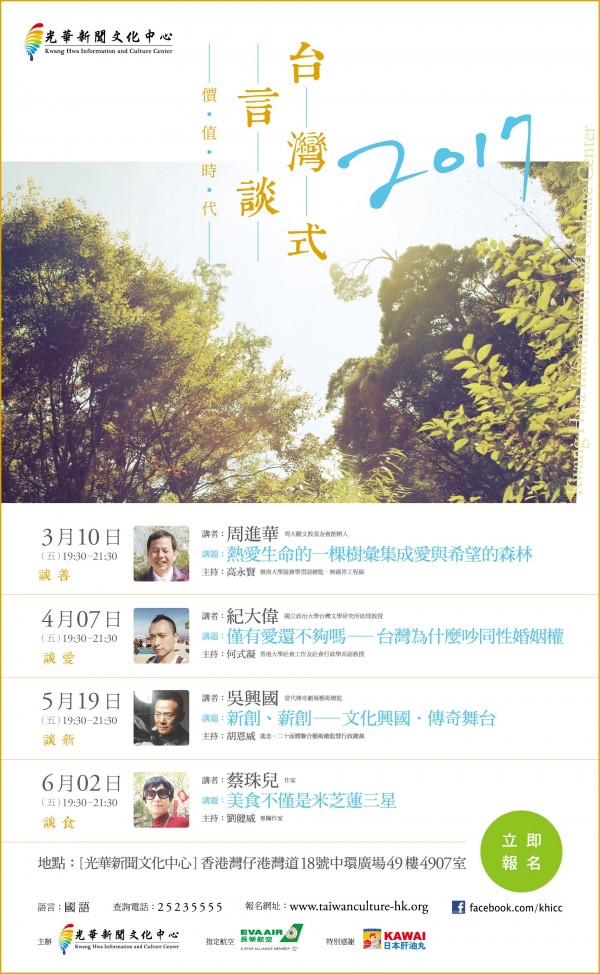 The first session of the 2017 Talks a la Taiwan in Hong Kong will begin on March 10, with philanthropist Chou Chin-huar (周進華), novelist Chi Ta-wei (紀大偉), theater actor Wu Hsin-kuo (吳興國), and lifestyle writer Jewel Tsai (蔡珠兒) arriving from Taiwan to give talks between March and June.

Starting on March 10, Chou, director of the Chou Ta-Kuan Cultural and Educational Foundation (周大觀文教基金會), will discuss how helping other cancer and rare disease patients have kept the loving memory of his young son alive.

The foundation has been the driving force behind the "Fervent Global Love of Lives” movement by sending aid to Kenya and 33 other countries for over two decades. With the help of roughly 430,000 volunteers, over 190,000 children with cancer have been sponsored for receiving treatment or fulfilling their dream of going to school.

The next forum on April 7 will be joined by Chi, a novelist and translator whose works include the award-winning book "Membrane (膜)” and commentary collection "Goodnight Babylon: Sexual Desires, Dissenting Views and Politics in the Internet Age (晚安巴比倫：網路世代的性慾、異議與政治閱讀).”

Chi has been earmarked for leading Taiwan's ku'er literature (酷兒文學) movement, in which the marginalized voices of those grappling with sexuality and identity underscore the emergence of a new cultural paradigm on Taiwan.

Following on May 19, Wu will discuss why he believes that Chinese opera works adequately with Western adaptations. The theater actor, playwright, and director has previously reimagined Shakespeare's "Macbeth” in a rendition whose combination of Peking opera with modern theater received rave reviews.

Trained in both traditional and modern theater, Wu founded Contemporary Legend Theatre in 1986, aiming to revitalize the declining Peking opera. He continues to develop and diversify the traditional performance art form in the hope of appealing to younger audiences.

Tsai, a popular food and lifestyle writer, will explain her recent shift away from cuisine and fine dining on June 2. Different creative subjective matter, including nature and culture, have become a new vehicle for advocating social responsibility and nostalgia.

Tsai first rose to fame for her elegant writing, refined tastes, and sense of leisure. She tied work in the kitchen to social observations and cultural research, forming a unique narrative that wove together the tangible (taste, sight, aroma) and the intangible (glamorous, sensible, holistic).