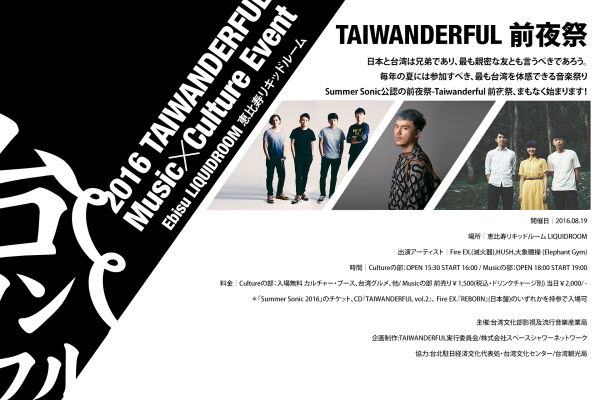 This year, Taiwanese artists Fire EX. (滅火器), HUSH, and Elephant Gym (大象體操) will be joining the 2016 Summer Sonic Festival, the largest rock festival in Japan that takes place concurrently in Tokyo and Osaka.

They will join an impressive concert lineup that includes heavyweights like Radiohead, The Offspring, The 1975, Weezer, and Two Door Cinema Club in Tokyo on Aug. 20 and 21.

Fire EX., a punk rock band whose music features Taiwanese vocals and local themes, will return to Summer Sonic for the second time. The band has released four studio albums as well as a special Japanese edition of their fourth album "REBORN.” The band is well known in international music festivals held in Japan, South Korea, Taiwan, Canada, and the United States.

HUSH, a singer and composer whose works are often inspired by astrology and tarot card readings, will make his first appearance in the Japanese music festival this summer. Renowned for his fashion and style, HUSH noted that he will wear outfits featuring Taiwanese elements to impress concertgoers.

Elephant Gym is a math-rock band comprised of three members. Featuring bass-driven and guitar-based instrumental music, the trio is known for their unique rhythm and splash of cuteness. This year's Summer Sonic will mark their return to the stage after being in hiatus since 2014.