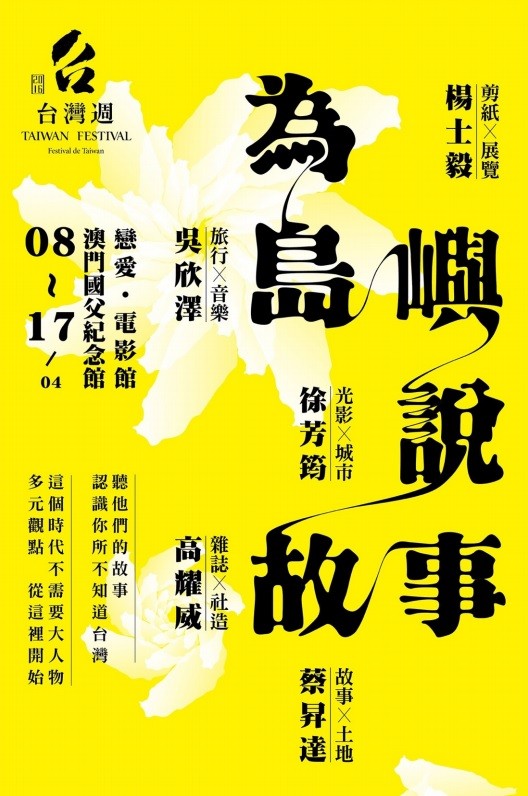 The Taiwan Festival in Macau will return on April 8 for its second edition at the Sun Yat-sen Memorial House, introducing the culture of Taiwan via exhibitions, forums, workshops, film screenings, and concerts that will run through April 17.

Co-organized by the Taipei Economic and Cultural Office in Macau and the Kwang Hwa Information and Culture Centre in Hong Kong, the 10-day festival will revolve around the theme of "Untold Stories of the Treasure Island” on the first week and "Youthful Deliberations - Mini Taiwanese Film Festival” on the second week.

To reflect the saying "The most beautiful scenery of Taiwan is its people,” Taiwanese artists Yang Shi-yi (楊士毅), Fanny Hsu (徐芳筠), Azer (吳欣澤), Gao Yao-wei (高耀威), and Andrew Tsai (蔡昇達) will join the Macau festival to share their innovative ideas and their contributions to the diverse culture of Taiwan.

Yang is a filmmaker who tells stories through his paper-cutting art, and he will be sharing his creations inspired by Macau. Hsu, an antiques investigator who returned to Taiwan in 2010 after staying in the U.S. for eighteen years, will share her experiences of traveling around Taiwan to get reacquainted with the island.

Gao, on the other hand, will tell how he reinvented an old street in Tainan City as a popular tourist destination with his creative store "Rainbow Is Coming (彩虹來了).” Tsai will also share his "OBL Taiwan (歐北來)” project that aims to revive less-visited places in Taiwan.

Azer, the aboriginal musician who established the first sitar music band ― The Siyuland (西尤島融合樂團) ― in Taiwan, will hold a concert to present the music of sitar during the festival.

For more information on the 2016 Taiwan Festival in Macau, please visit www.taiwanfestmo.tw.