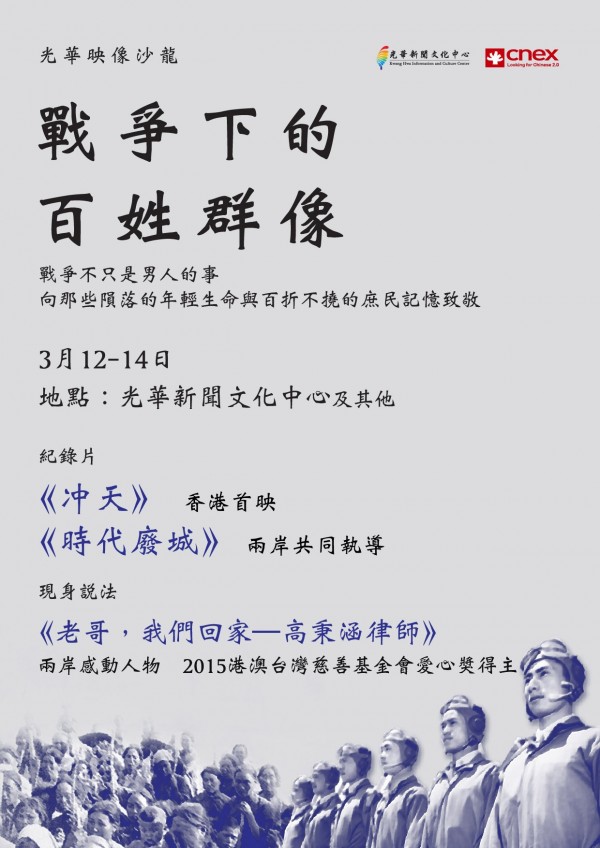 Two documentaries examining the lives of ordinary people against the backdrop of extraordinary circumstances of warfare and diaspora will be screened at the Kwang Hwa Information and Culture Centre from March 12 through 14.

"The Forgotten City (時代廢城),” a cross-Taiwan Strait production by Taiwanese director Gary Shih (史祖德) and Henan native Ning Huo (霍寧), describes the predicament of old veterans and factory workers as their way of life face imminent destruction. The inevitable closure of factories and military dependents' villages to make way for urban reforms parallel their displacement in a post-war Chinese world.

Centered on the industrial hub of Luoyang in Henan Province and the military dependents' villages in Kaohsiung's Zuoying district, "The Forgotten City” has been touted as the unofficial epilogue to the "Big River, Big Sea - Untold Stories of 1949 (大江大海一九四九)” chronicles by Taiwanese social critic Lung Ying-tai (龍應台).

"The Rocking Sky (冲天)” tells of the Second Sino-Japanese War through the eyes and letters of three women of great mettle. As wife, sister, and friend to Nationalist aviators - educator Hsu Hsi-ling (許希麟), architect Lin Hui-yin (林徽因), and writer Chi Pang-yuan (齊邦媛)give personal and emotional context to the great mass of casualties and forgotten histories buried amongst that turbulent era.

Between 1937 and 1945, the casualty rate was close to fifty percent for fighter pilots in the ROC air force. Hsu lost her 24-year-old husband Liu Tsui-kang (劉粹剛), an ace nicknamed the "Chinese Red Baron”; Lin lost her younger brother Lin Heng (林恒); and Chi lost her childhood friend and admirer Chang Da-fei (張大飛). Together, their interwoven stories paint an irreparable picture of resolution and loss.

The screenings will open with a forum featuring Kao Ping-han (高秉涵), a war orphan who followed the soldiers with a sun emblem on their hats to Taiwan in 1949. Now a retired lawyer, Kao has been quietly transporting the urns of cremated Nationalist veterans back to their hometowns in China in a decade-long act of charity to repay the kindness they showed him during his childhood.