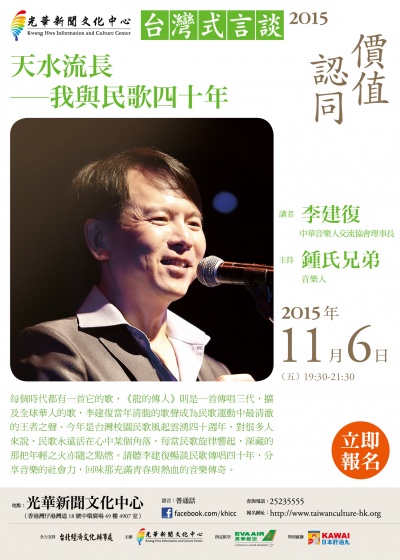 Li Jian-fu (李建復), an iconic Taiwanese folk singer, will be delivering a speech on his musical journey at the Kwang Hwa Information and Culture Centre in Hong Kong on Nov. 6.

The event organized by the Ministry of Culture's overseas branch in Hong Kong will celebrate the 40th anniversary of Taiwan's folk music movement. Li will give a speech titled "40 Years of Folk Music and I” at a forum hosted by the Chung Brothers (鍾氏兄弟), a top jazz & blues band based in Hong Kong.

Li is one of the iconic folk singers who made folk music a mainstream genre in Taiwan from the 1970s to the 1990s. He is best known for "Descendants of the Dragon (龍的傳人),” a Hou De-jian (侯德建) creation. The 1978 song was viewed as patriotic as its lyrics were written in responseto the serious downturn in Taiwan-U.S. relations during the 1970s.

Although folk music is no longer considered mainstream, "Descendants of the Dragon” is still sung today by generation after generation. As a leading singer of the genre, Li will be sharing stories on the golden age of folk music in Taiwan that will be sure to arouse a sense of nostalgia.

To register for the event, please visit http://goo.gl/forms/aCRpAVp8pk.