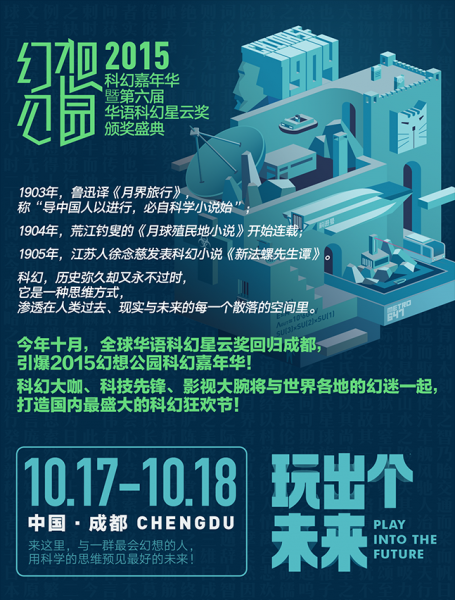 Four Taiwanese science fiction writers who are nominated for China's Nebula Awards will be joining the 2015 Nebula Awards on Oct. 17 in Chengdu City, Sichuan Province.

Organized by the World Chinese Science Fiction Association (世界華人科幻協會), the annual Nebula Awards was established to encourage and promote Chinese-language science fiction from around the world.

This year, the Nebula Awards received a total of 469 submissions in 12 categories. The nominees from Taiwan are Ping Chung-chi (平宗奇) for the Emerging Writer category, Huang Hai (黃海) for the Teen Fiction category, Tang Cheng-wei (唐澄暐) for the Novella category, and Lee Wu-hsun (李伍薰) for the Novel category.

Notable science fiction writers based in China and Taiwan will be joined by scientists and publishing professionals from around the world, including representatives from Marvel Comics.

In addition, a fan meeting will welcome actors from the upcoming Chinese science fiction film — "The Three-Body Problem (三體).” The film is adapted from the same-titled novel by writer Liu Ci-xin (劉慈欣), who recently won the 2015 Hugo Award for Best Novel.

The 2-day affair will offer forums, exhibitions, markets, and salons. The winners of the 6th Nebula Awards as well as the 4th Fantasy Essay Competition Awards will be announced on Oct. 18.