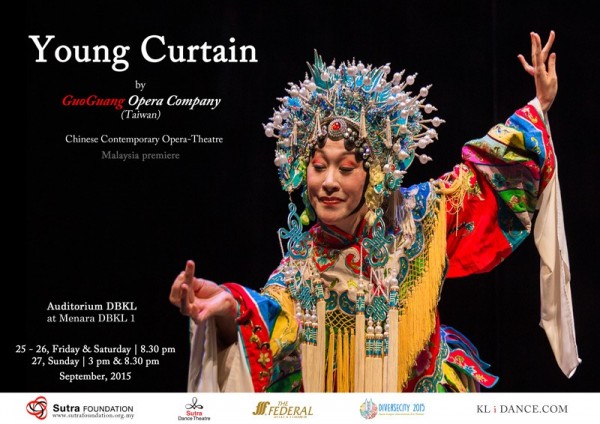 A Beijing Opera take on the classic Faust tale will be staged by the GuoGuang Opera Company in Malaysia as part of the 2015 Kuala Lumpur International Arts Festival from Sept. 25 to 27.

Titled "Young Curtain,” the original production is styled after the pursuit of eternal youth and immortality that drove Faust to sell his soul to the Devil. It features a young actress at the prime of her career, who meets a mysterious man offering her a potion for everlasting youth. Thought resisting the temptation at first, she eventually succumbs to temptation and accepts the potion.

"Young Curtain” is part of the "Great Dream in Little Theater” series first released by GuoGuang in 2013. Written and directed by contemporary theater producer Wang Yiu-hue (王友輝), the series offers classic micro-theater opera that combines the traditional form of Beijing Opera with the techniques of modern drama.

In "Young Curtain,” the special makeup techniques of Beijing Opera will be presented on the stage in an unprecedented move to showcase an actor's transformation into character. Together with skillful singing, oration, acting, and fighting, the aesthetics of Beijing Opera will showcase the wonderful charm of everlasting youth on stage.