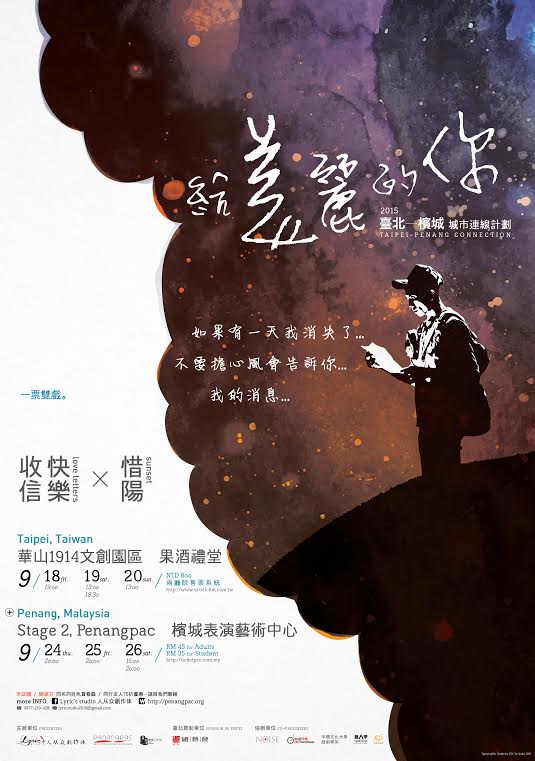 Taiwan-based Lyric's Studio (人从众創作体) will collaborate with 4 Malaysian performance groups by staging two theater plays in Taipei and the Malaysian state of Penang this September.

The "Taipei-Penang Connection” was established to commemorate artist Huang Guan-yu (黃冠煜, 1981-2015), the late founder of Lyric's Studio. Lyric's Studio and the Malaysian groups will premiere two of his original plays ― "Sunset (惜陽)” and "Love Letters (收信快樂)” ― in Penang to fulfill Huang's dream.

Huang was a Malaysian who studied theater arts at the Chinese Culture University in Taiwan. Passionate about directing, performing, composing and drawing, he founded the Lyric's Studio in 2010 to create art that explores the human condition. He passed away from health complications earlier this year.

"Sunset,” one of Huang's earliest directorial works, featured Huang and two other actors in 2001. It tells the story of a boy and a girl's life, loss, and hope. An adaptation directed by Huang Li-jeng (黃麗珍) will be presented with more Malaysian elements added.

Directed by Huang Wei-hsiang (黃煒翔), "Love Letters” is about the lives of two friends who wrote letters to each other over a span of 40 years. The work was directed by the late Huang, and it was his wish to bring this performance to his hometown.