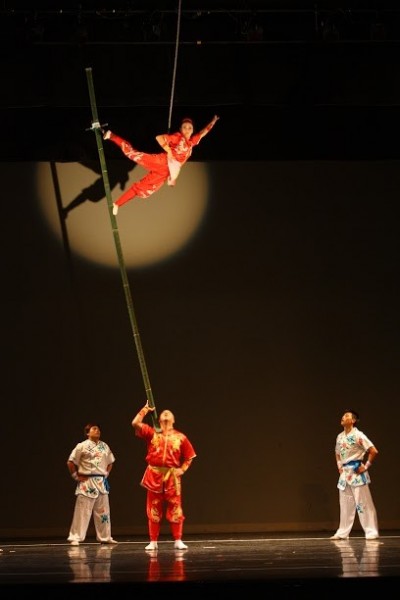 The Troupe of Acrobatics of the National Taiwan College of Performing Arts (國立臺灣戲曲學院綜藝團) will set off for Malaysia for a Sept. 1 performance at the KUASH Theatre in Kuala Lumpur. They will present Chinese folk acrobatics encompassing face changes, contortion, diabolo tricks, and other stunts.

Fu Xing Drama School (復興劇校), the predecessor of the National Taiwan College of Performing Arts (TCPA, 國立台灣戲曲學院), was established in 1957 as the only institute cultivating acrobatic talent in Taiwan. In 1990, the acrobatic troupe was formed by recruiting roughly 40 alumni members and performers from the Chunghwa Folk Arts Training Centers (中華民俗技藝訓練中心) and the Li Tang-hua Acrobatics Troupe (李棠華雜耍技藝團).

Every member of the troupe has received strict training for at least 8 years. The folk acrobatic skills they've acquired range from bamboo-poling (扛高竿) and plate-turning (轉盤) to leaping through hula hoops (穿地圈), all of which require strong physical strength and balance while maintaining graceful poise.

As a preserver of the traditional folk style of acrobatics, the TCPA Troupe of Acrobatics has continued to experience, innovate, and evolve, hoping to enhance the performance genre by combining contemporary aesthetics with Chinese tradition. As an eastern cirque nouveau, they will be bringing an enthralling show for audiences in Malaysia.

‘The Taiwan Troupe of Acrobatics'