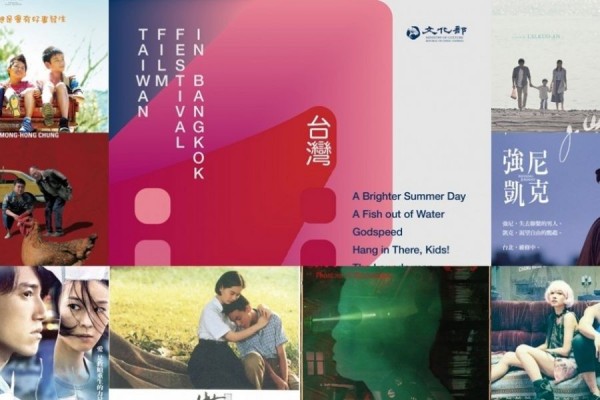 The inaugural edition of the Taiwan Film Festival in Bangkok will be held from Jan. 17 to 23 at the EmQuartier shopping mall to promote exchanges between Taiwan and Thailand through film.

The lineup includes 8 films from Taiwan and 2 films from Thailand – 1984 classic “The Story of Nam Pu” on the last days of a drug-addicted young man by director Euthana Mukdasanit, and the 2017 documentary “Phantom of Illumination” on the dying breed of stand-alone movie theatres in Bangkok by emerging director Wattanapume Laisuwanchai.

The opening film “Hang in There, Kids! (只要我長大)” directed by Laha Mebow (陳潔瑤), a 42-year-old filmmaker of Atayal heritage, is strong, optimistic, and playful despite its honest portrayal of the crippling challenges faced by Taiwan’s indigenous communities. The contrast between tribal and metropolitan life is based upon the director’s own urban childhood.

Another highly anticipated film is “A Brighter Summer Day (牯嶺街少年殺人事件),” one of the most memorable portrayals of injustice by late auteur Edward Yang (楊德昌). The 1991 crime story bemoans the lack of warmth in people’s hearts as mounting oppression in Taiwanese society results in murderous consequences.

Hou Chi-jan (侯季然) – director of 2016 documentary “Ode to Time (四十年)” on the late visionary Yang – and Lai Kuo-an (賴國安) – director of 2016 drama “A Fish Out of Water (賴國安)” on a child’s seemingly psychic connection to his parents from a different life – will also be attending post-screening forums at Bangkok festival.

Other Taiwan-made films include 2015 dark thriller “The Laundryman (青田街一號)” on a contract killer haunted by the ghosts of his successful hits; 2017 drama “Missing Johnny (強尼・凱克)” on the loneliness of urban city life; 2016 film “White Ant (白蟻)” on a quiet bookstore clerk’s uncontrollable fetish for female underwear; and 2016 black comedy “Godspeed (一路順風)” on a wry road-trip gone wrong.

All films will be screened with English and Thai subtitles. 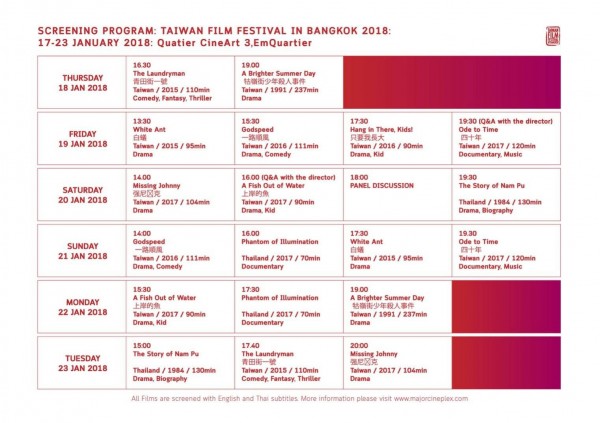