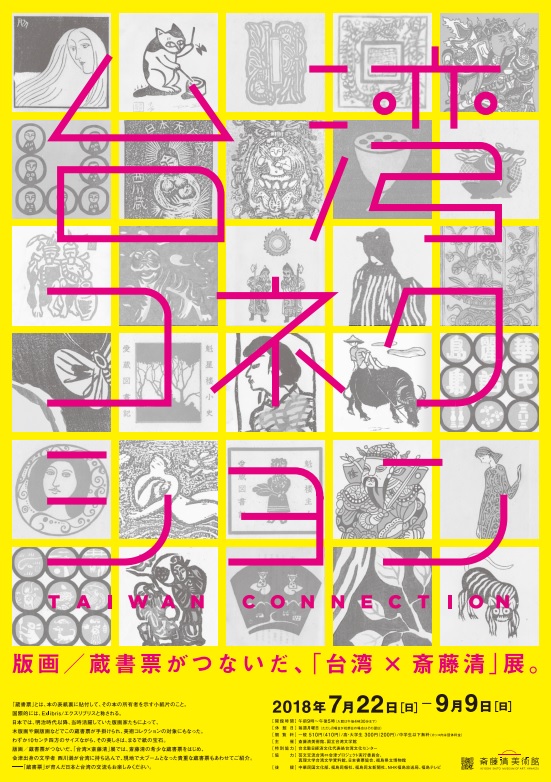 An exhibition featuring late Japanese scholar Mitsuru Nishikawa's collection of Taiwan-inspired cultural relics — such as hand-carved stamps, self-edited magazines, and bookplates — will be on view at two museums in Japan's Fukushima Prefecture from July 22 through Sept. 9.

Born in Aizuwakamatsu City in Fukushima in 1908, Nishikawa was a notable Japanese writer and book-binding artist during the Japanese colonial era of Taiwan. During his stay in Taiwan from 1910 through 1946, he was prolific in his literary creations, in which most were based on Taiwanese history, customs, and traditions.

In addition, he advocated the use of Taiwanese bookplates since they embody a strong sense of folklore culture. He had more than 20 different bookplates in his collection that featured ancient city gates, talismans in the shape of mythical beasts, tigers, goddess Matsu (媽祖), and a trio of gods representing fortune, prosperity, and longevity (福祿壽).

In cooperation with the Fukushima Museum and Saito Kiyoshi Museum of Art in Yanaizu, the National Museum of Taiwan Literature hopes that Japanese exhibition-goers will be able to experience Taiwan's lively folk culture through Nishikawa's works and his connection with Fukushima.

‘Magnificent Island — Taiwan and Japan in the Eye of Nishikawa’