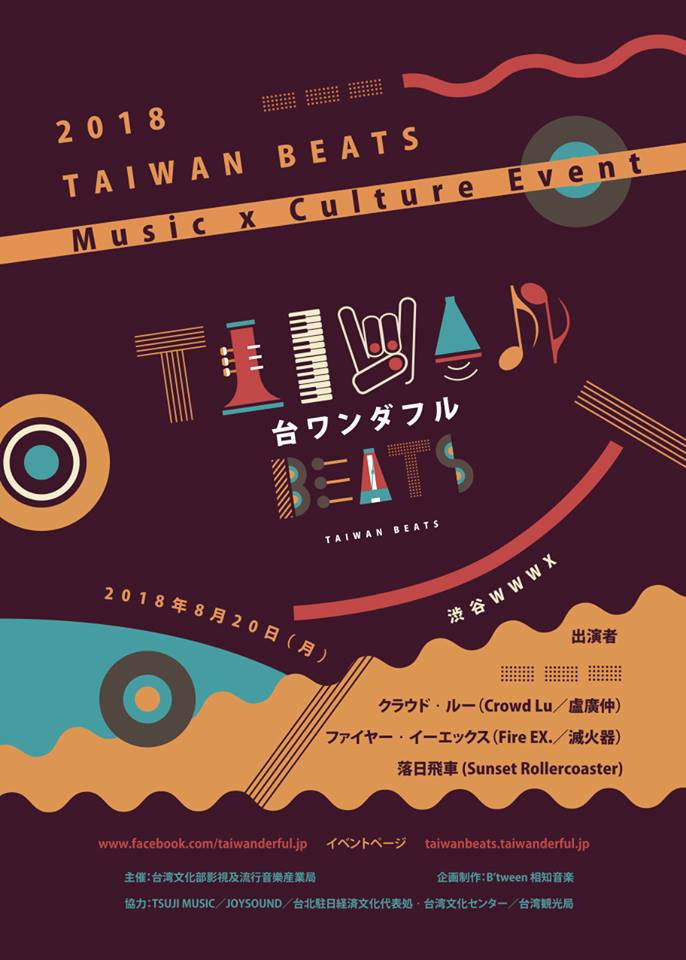 Lu is a songwriter, singer, and actor whose single "He-R (魚仔)" was recently named Song of the Year at the 29th Golden Melody Awards (GMA) in Taiwan. He was invited to perform in Tokyo at the concert of Japanese pop singer Yo Hitoto (一青窈) in March and toured Hong Kong, Singapore, Tokyo, and the United States earlier this spring. Lu made his Summer Sonic debut in 2015 on the Garden Stage and has since amassed a large group of diehard supporters in Japan.

As the winner of the Best Musical Group at the 29th GMA, No Party For Cao Dong will launch their first world tour this year in 32 countries, including China, Hong Kong, Japan, Malaysia, Singapore, and South Korea, as well as several stops in the US and Europe. People sneeringly call them "No TICKET For Cao Dong" since their concert tickets in Taiwan are always sold out within a few seconds. They will be holding two concerts respectively in Kyoto and Tokyo one month prior to their Summer Sonic debut in August.

Established in 2000, Fire EX. is a renowned indie punk band in Taiwan that invited Okinawan rock band MONGOL800 to Kaohsiung's Fireball Fest. (火球祭) last year. To showcase their cross-national friendship, Fire EX. will be joining What a Wonderful World!! 18 ─ which is curated by MONGOL800 ─ as the first foreign band ever invited to the Okinawa-based music fest.

Sunset Rollercoaster is a five-man ensemble that serenades to the fantasy of love and intoxicating experiences. Its use of absurdist lyrics and musical elements from soul, garage, and psychedelic rock has made the young band an icon of urban Taipei pop. The band has a budding fan base in Japan and will perform at the 2018 Tokyo Calling on Sept. 17.

The 2018 Summer Sonic will be held on Aug. 18 and 19, featuring rock bands such as Nine Inch Nails, My Bloody Valentine, High Flying Birds, and DJ Marshmello. Aside from Taiwan’s Crowd Lu and No Party For Cao Dong, Chinese hip-hop group Higher Brothers and South Korean R&B singer Zion.T will also be performing on Billboard JAPAN STAGE.

What a Wonderful World!! 18

What a Wonderful World!! is the largest outdoor musical festival in Okinawa that is joined by more than 50,000 people each year. Slated for Nov. 3 and 4, the 2018 edition will feature famous acts including Sony Music Japan’s Sambomaster, Tokyo metal ensemble Maximum the Hormone, MONGOL800, rock band MONOEYE led by Takeshi Hosomi, and Taiwan’s Fire EX.

The annual Taiwan Beats showcase in Shibuya will take place on Aug. 20 with scheduled performances by Crowd Lu, Fire EX., and Sunset Rollercoaster. More information on the admission-free event can be found at http://taiwanderful.jp.