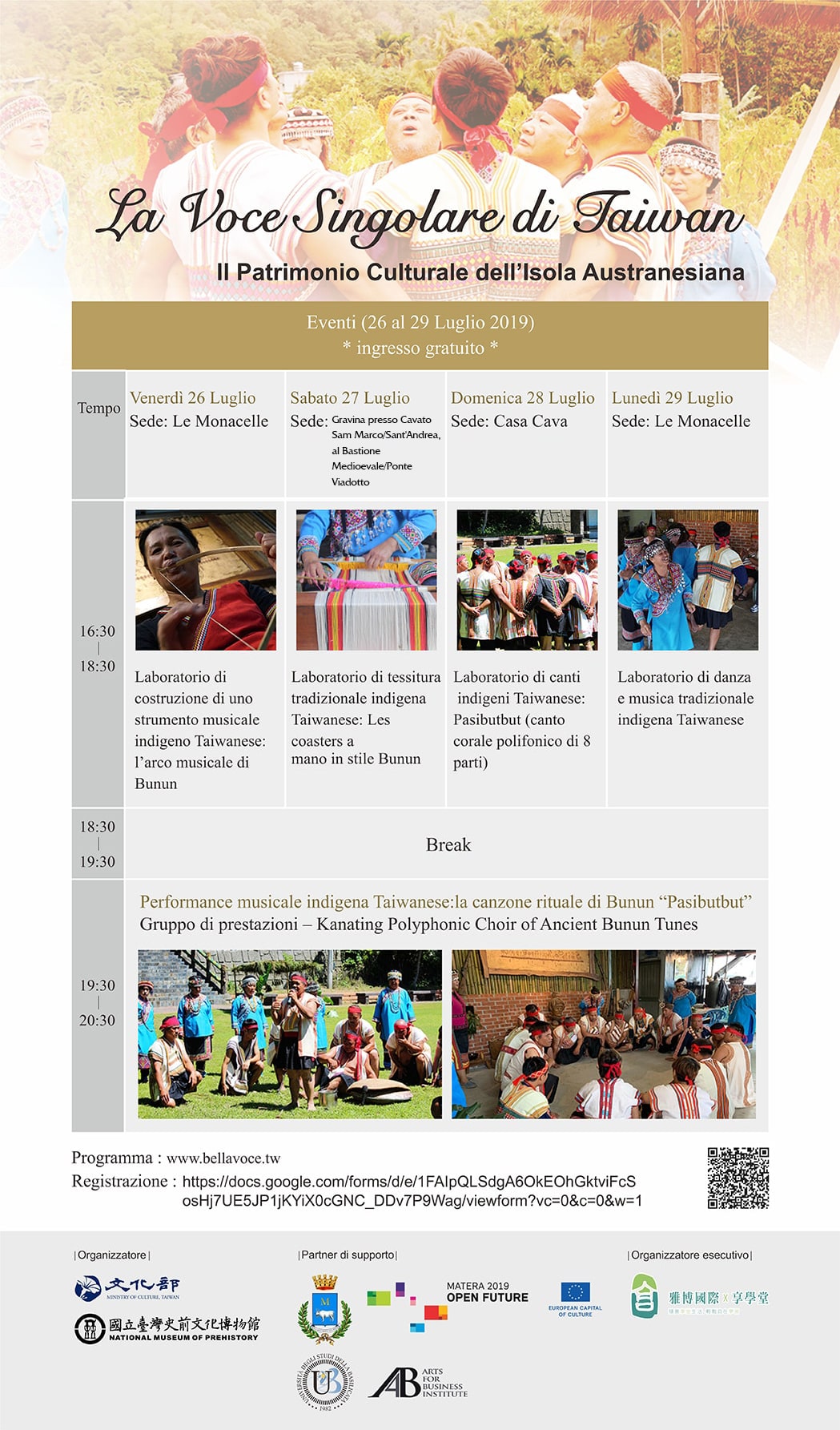 The National Museum of Prehistory has organized a series of cultural workshops to showcase Taiwan's indigenous cultures through performances, arts, and handicrafts at the Italian city of Matera from July 26 to 29. The initiative aims to raise awareness of Taiwan's status as an island of Austronesian heritage.

Taiwan, also known as Ilha Formosa or "beautiful island" in Portuguese, has been home to various groups of indigenous peoples for over 15,000 years. Today, they number around 530,000 to 800,000, accounting for about 2.3 to 3.5% of Taiwan's total population. Moreover, their languages belong to the Austronesian language family — the most widespread group of languages in the world.

As the origin of this language family, Taiwan is considered the homeland of Austronesian heritage. The dispersion of the Austronesian population into previously uninhabited Pacific islands started around 6,000 years ago. Therefore, all indigenous languages in Taiwan are rooted in pre-diaspora Austronesian practices and have been passed down by oral traditions.

For two decades, various indigenous Taiwanese groups have been stepping up to the plate to spearhead a cultural revival, sustaining the inheritance of not only tangible cultures, but also of the intangible such as languages, music, arts, and craftsmanship.

Musical culture of the Bunun

The Bunun tribe is the fourth largest of Taiwan's indigenous groups. Traditionally, the Bunun did not have a centralized leadership. Instead, after consulting with an elected group of elders, decisions were made by consensus. Before the Japanese colonial era, the Bununs were semi-nomadic hunter-gatherers, living in villages or small family groups throughout the northern and central parts of the Central Mountain Range.

Like other indigenous groups in Taiwan, headhunting was a common Bunun practice for protecting tribal territory, but this custom died out with the arrival of Christian missionaries at the end of the 19th century. Bunun people also had a reputation as skilled hunters and fierce warriors who tattooed their bodies and filed their teeth, but these customs have gradually disappeared.

Like other indigenous peoples in the world, the Bunun's music and dance practices are inseparable from every aspect of their daily lives, including myths and legends, collective and individual history, social customs, living environment, and rituals.

Especially valuable are their songs that serve as "books" and cultural carriers of all wisdoms, histories, and life experiences passed down from generation to generation. Bunun musical instruments include the bow harp or latuk, a harp known as honhong, the five-string zither or banhiratuk, and pestles called dudur.

Of all the Bunun vocal performances, the most renowned repertoire is the pasibutbut — a semi-improvised polyphonic singing that has become one of the most studied subjects among musicologists around the world. While singing, all singers attentively listen to each other to match the most subtle of changes while harmonizing. This singing style is considered so unique that it attracts steadfast attention from Western avant-garde composers.

The Bunun people have been performing throughout Asia, Europe, and North America, representing Austronesian and indigenous culture from Taiwan. Their repertoires often come from traditional ceremonies that follow the Bunun agricultural calendar as well as rites of passage commemorating birth, marriage, and death.