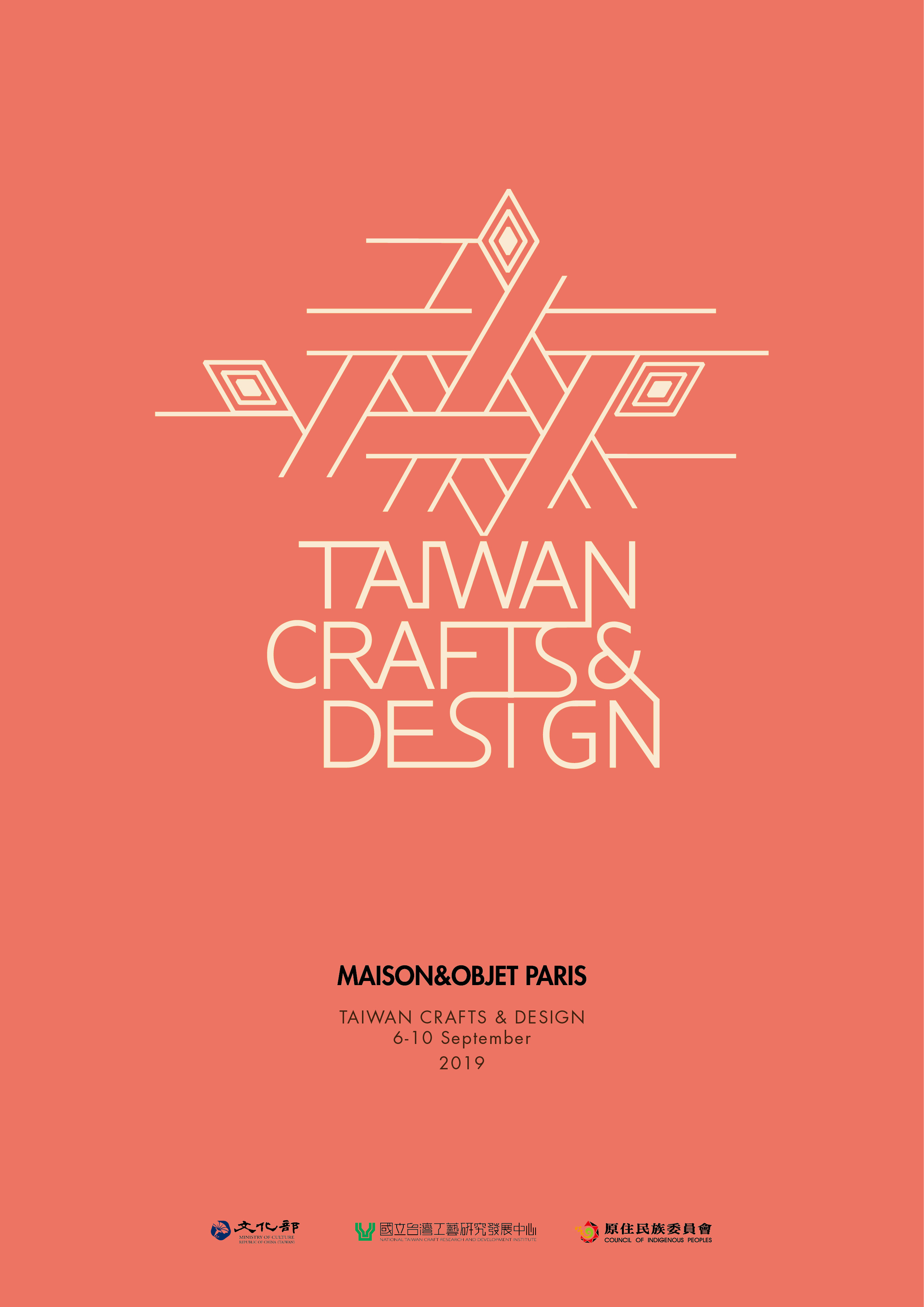 The "Taiwan Crafts & Design Pavilion" will bring the eco-friendly crafts and entrepreneurial spirit of Taiwan's indigenous peoples to the international trade show Maison et Objet Paris from Sept. 6 to 10.

To elevate the international visibility of Taiwan's craftsmanship and innovation, the National Taiwan Craft Research and Development Institute (NTCRI) has led Taiwanese contemporary craft and design brands to participate in the yearly Parisian trade show since 2008. Such efforts show the government's commitment in supporting the local cultural and creative industry and engaging in cultural diplomacy.

This year, with the additional support of the Council of Indigenous Peoples (CIP), eight craft and design brands will represent Taiwan's cultural diversity and indigenous heritage at Maison et Objet Paris. The pavilion's principal visual design is derived from a combination of the weaving techniques and traditional patterns of the Atayal tribe.

Atelier Unique tapa (獨樹依織) is devoted to bringing back the traditional tree-bark crafts of the Amis and Austronesian communities, as the culture of barkcloth previously disappeared in Taiwan for about half a century. After spinning tree fibers to cloth, the atelier creates bark earrings, bark bowties, and framed bark artworks.

Bao Xiang (寶象) first made its mark with the creation of large, installation-like ceramics such as animal figurines, elephant chairs, and umbrella holders. It has since refocused on classical fine ceramic collections and tea sets that are replete with natural elements like auspicious butterflies, plum blossoms, and a parade of snails.

CELEMENT LAB (軟水泥生活實驗室) is named after its special mixture of cement and silicon, whose proportions give way to a hard-looking surface that is soft to the touch. Its heat- and water-proof qualities are then applied to both furniture like chairs and organized storage for glasses, cellphones, stationary, and accessories.

Dipong (弟朋), which is named after the word for "bird nest" in the Amis language, aims to enhance the properties of natural materials through good design. Items like its vase that connects the veins of marble with wood grain, or its coat rack made from beach stones and driftwood, present tribal aesthetics and a lifestyle that respects the environment.

HUNSHEN (魂生製器) is inspired by the beautiful sights of the Taiwanese eastern coast. Each piece aspires for balance, using marble waste collected from Hualian companies to produce stoneware inspired by Taroko Gorge, and developing eggshell porcelain with sapphire blue crystalline that mirror the boundless night skies.

LIHIYA, which means "covering or to be covered" in Eswatini, is a Yilan-based store founded by the two daughters of Mathendele Dlamini, the former Eswatini ambassador to Taiwan. The sisters' fashionable garments and accessories are a blend of African and Taiwanese elements, the store also works to empower rural women from Eswatini.

MUFUN (木趣設計) offers a range of animal-themed wooden products, using animalistic motifs to promote resonance among consumers and raise awareness of the need for ecological conservation. Its bird-shaped pen sets and figurines based on the endemic Taiwan Dog are also interactive with mobile parts.

warmstone & life (暖石心) aims to inject the heritage and vitality of Hualien into its product design. For example, its star-light lamps are made with opaque ivory porcelain, a material that previously could not transmit light, and the lamp's octagonal flower shape is derived from a pattern commonly found in indigenous weaving and embroidery.

The certified-sustainable "Taiwan Crafts & Design Pavilion" will be found in Hall 5A, at stands M54 and N53 at the "Signature: Unique & Eclectic" division.