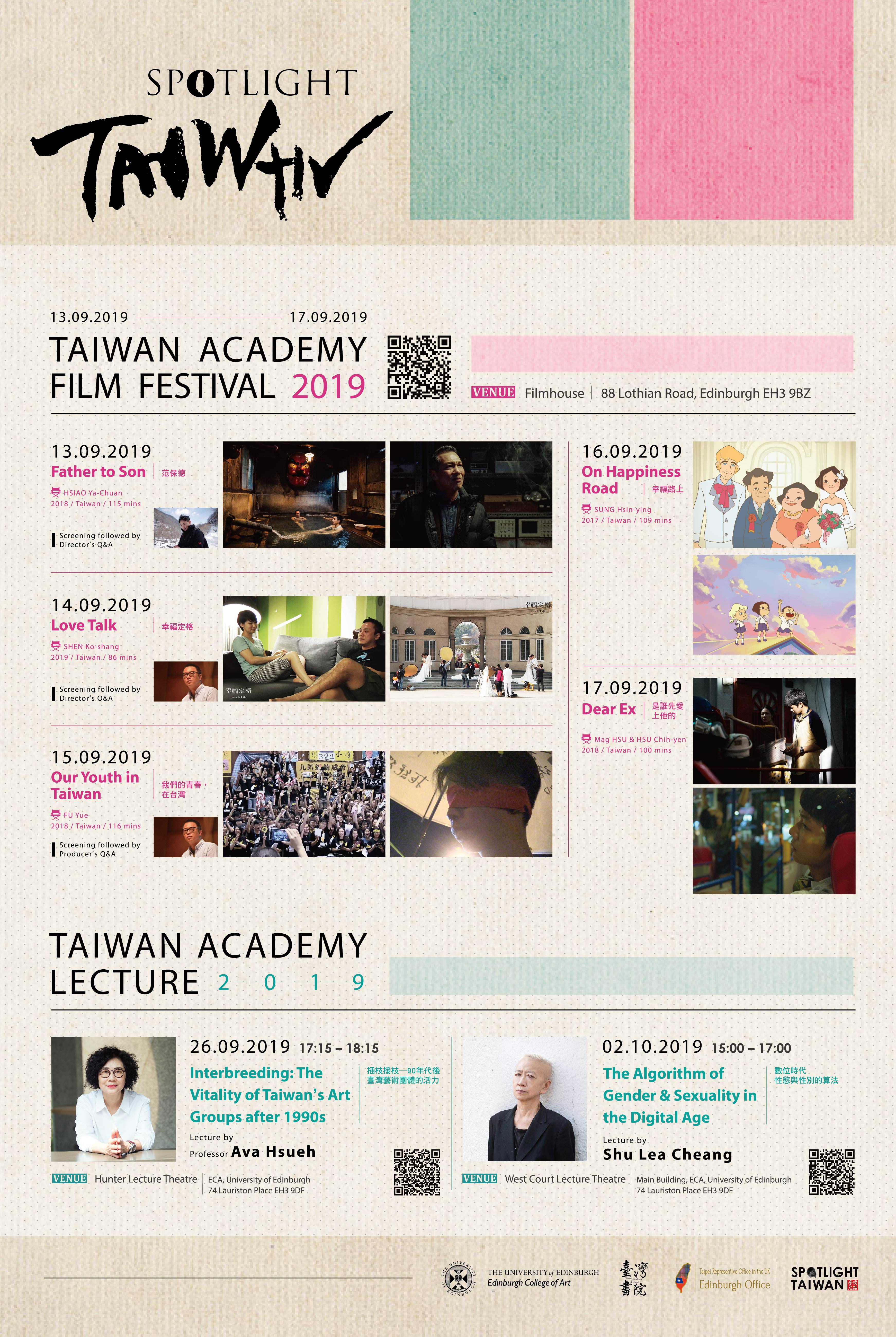 The film festival will open on Sept. 13 with Hsiao Ya-chuan's (蕭雅全) 2018 feature "Father to Son (范保德)." Produced by auteur Hou Hsiao-hsien (侯孝賢), the story begins with an illness-afflicted patriarch who is looking for his father that abandoned him 50 years ago. In tow on this feeble-hoped trip to Japan is his own emotionally neglected son.

Up next from Sept. 14 to 16 are "Love Talk (幸福定格)," a Shen Ko-shang (沈可尚) documentary on the married life of eight young and mature couples; "Our Youth in Taiwan (我們的青春，在台灣)," an exploration of Taiwan's largest social movement in 24 years by Golden Horse-winning director Fu Yue (傅榆); and "On Happiness Road (幸福路上)," a semi-autobiographical animation by filmmaker-scriptwriter Sung Hsin-yin (宋欣穎) that covers decades of Taiwanese history through the eyes of a returning expatriate.

The closing film will be screened on Sept. 17. "Dear EX (誰先愛上他的)" follows three people who are linked by fate upon the passing of Song Zheng-yuan (宋正遠). His wife and son are confronted by the fact that Song left his insurance money to his gay lover, Jay. This pivotal film by Mag Hsu (徐譽庭) and Hsu Chih-yen (許智彥) does not sensationalize or victimize queer love; instead, its heartfelt sincerity provides hope for a more inclusive Taiwanese society.

Three directors and producers will also fly to Edinburgh to hold post-screening Q&As — Hsiao on Sept. 13 for "Father to Son," Shen on Sept. 14 for "Love Talk," and movie producer Hung Ting-yi (洪廷儀) on Sept. 15 for "Our Youth in Taiwan."

The first lecture on Sept. 26, "Interbreeding: The Vitality of Taiwan’s Art Groups after the 1990s," will focus on how the art scene in Taiwan has built a collective cultural identity through localization. The second lecture on Oct. 2, "The Algorithm of Gender & Sexuality in the Digital Age," will discuss the surveillance and imprisonment of nonconformity and the "3x3x6" mixed media installation representing Taiwan at Venice Biennale 2019.