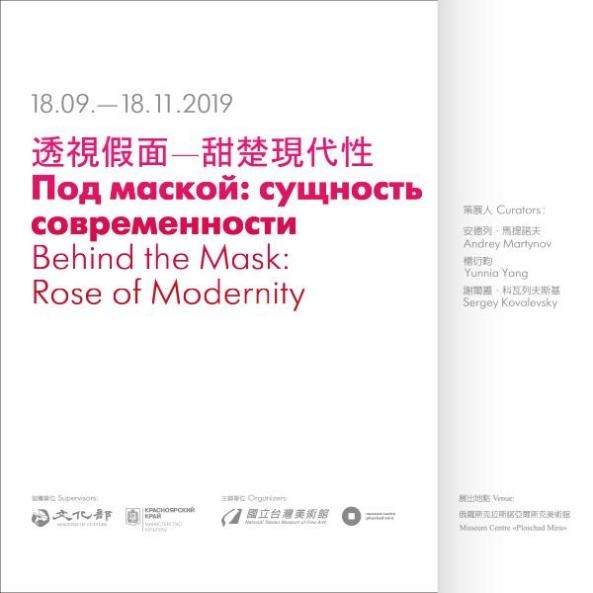 In cooperation with the Taichung-based National Taiwan Museum of Fine Arts, a fine selection of 48 sets of brilliant works by 35 Taiwanese photographers and artists will be displayed at the Krasnoyarsk Museum Center (Ploshchad Mira) in Russia as part of the Russian museum's 13th biennale from Sept. 18 through Nov. 18.

"Behind the Mask: Rose of Modernity" will employ a two-pronged strategy devised by three guest curators — Andrey Martynov, Yunnia Yang, and Sergey Kovalevsky — to channel the Taichung museum's photographic art collection and chart Taiwan's social transformation since the 1960s, and draw on psychologist Erving Goffman's dramaturgical theory to investigate interpersonal relationships, social interactions, and the interplay between everyday practice and theatrical gestures.

The question as to how photographers become "mediators" in Goffman's analysis will also be addressed by the exhibition. In terms of the entries selected by the three guest curators, "Behind the Mask: Rose of Modernity" is tantamount to a mirror of Taiwan's modernization since the second half of the 20th century, which is marked by a pursuit of economic growth and materialistic wellbeing that have led people to deviate from their homespun philosophy of life.

By way of comparison, budding photographers do not simply criticize or fire a warning shot across the bows, but also apply innovative methods to the commemoration of one’s halcyon days. Photographers are quoad hoc mediators between culture and society, past and future, nature and civilization, and individuals and the multitude. In short, they represent Taiwan's society in all its manifestations on the photographic stage, unveiling the vicissitudes of life behind the scenes.

The 48 featured sets, which translate to a total of 95 individual artworks, will be on display at Krasnoyarsk, Siberia through Nov. 18 as part of the XIII Krasnoyarsk Museum Biennale. More information is available at  www.mira1.ru/event/827.