Midi Z documentary to be screened in Paris on March 2 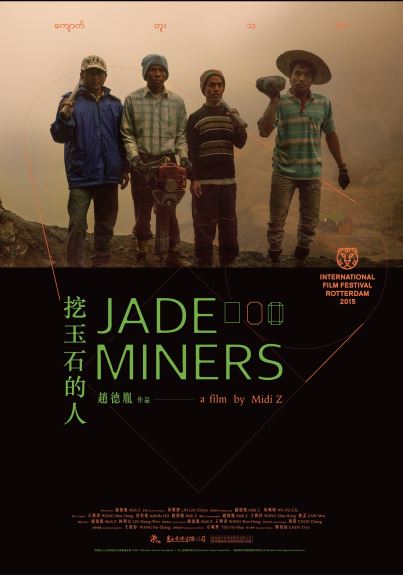 "Jade Miners (挖玉石的人),” a Yunan- and Burmese-language documentary by Midi Z (趙德胤) that held its world premiere at the 2015 International Film Festival Rotterdam, will be screened in Paris on March 2 as part of the "La Semaine des cinémas étrangers" program organized by FICEP.

Towards the end of 2012, when the Burmese army waged war on the Kachin Independence Army (KIA), many corporations contracted to work with the government on jade mining in the area were forced to stop their operations. The jade mines stretching up to hundreds of kilometers had become a war zone. Workers from all over the country flocked to the jade mines in the Kachin State to dig illegally for jade. They risked being arrested by the soldiers and being buried alive by rocks. All they wanted was to find a piece of beautiful jade that will lead them to a more comfortable life.

Carrying simple digging tools, they arrive in this paradise, dreaming of getting rich overnight; none of them has ever woken from that dream. The film depicts how people struggle for survival in the darkest corners of Myanmar, where Midi Z was born before training as a film artist in Taiwan.

Born in Myanmar in 1982, Midi Z arrived in Taiwan at the age of 16. He studied design and art before obtaining a master's degree from National Taiwan University of Technology and Science. In 2006, his graduation film, "Paloma Blanca," was selected for several festivals such as Busan and Gothenburg. From 2011 to 2014, Midi made three narrative features — "Return to Burma," "Poor Folk," and "Ice Poison"; all were shot in less than ten days with a budget lower than US$10,000.