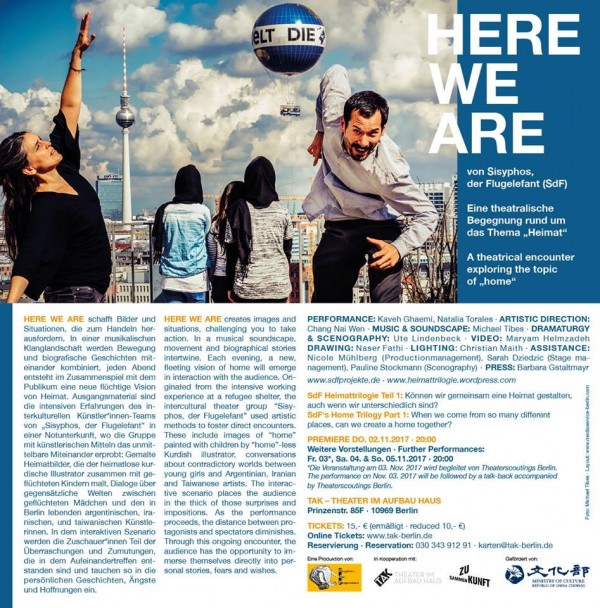 A sense of home emerges from the moment people come together: the reunion of those who already know each other, and the gathering of strangers, who share their ideas of home with each other…

A theatrical encounter exploring the concept of "home” will be staged by Taiwanese theater director Chang Nai-wen (張乃文) and SdF (Sisyphos, der Flugelefant, 飛象西西), a Taiwanese-German art group, in Berlin from Nov. 2 through 5.

SdF uses art and theater to raise awareness for issues pertaining to immigration and displaced populations. Since 2016, the troupe has been working at an emergency shelter for refugees in Berlin and collaborating with world artists such as homeless Kurdish illustrator Naser Fathi, Syrian Oud player Wassim Mukdad, and German pop music producer Michael Tibes.

To explore the feeling of "belonging” from different perspectives, Chang and SdF envisioned a trilogy called "Heimattrilogie” - or "home.” The first episode "Here We Are” is based on a careful set of choreography that provides space for those who want to dance but are not allowed to do so, and invites the audience to react to the question: "Can you prevent my deportation?”

The interactive scenario places the audience in the thick of those surprises and impositions within the encounter. As the performance proceeds, the distance between protagonists and spectators diminishes. Through this ongoing encounter, the audience has the opportunity to become directly immersed in the personal stories, wishes, and fears so eloquently on display.

Between globalization and immigration, one's home and allegiance are no longer defined by race, culture, or familial ties, but by the sharing of space and time. Chang and SdF hope to expose the selfishness of those who refuse to share - is home not a universal concept? Why can't different homes co-exist?