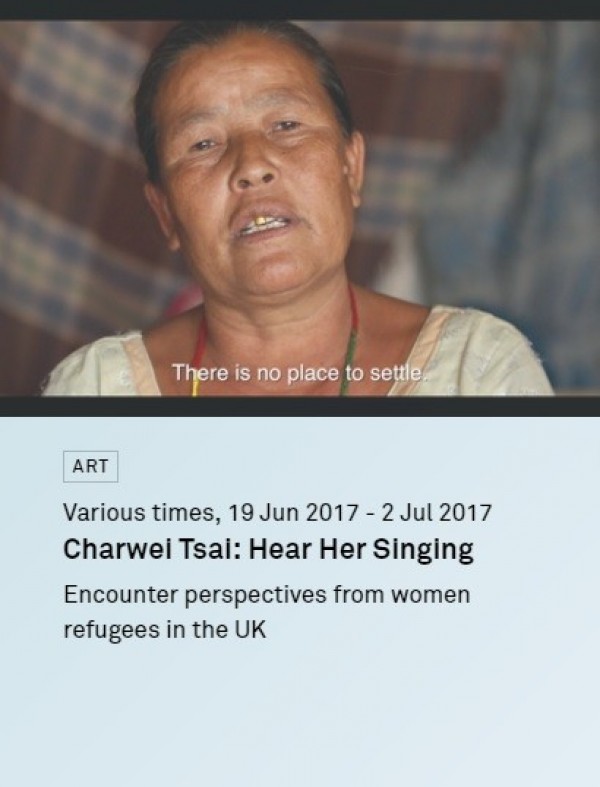 "Hear Her Singing,” a refugee-awareness project using the universal nature of vocal music, will debut at the Southbank Centre in London on June 19.

With the support of Taiwan's Ministry of Culture and the Cultural Division of the Taipei Representative Office in the UK, Taiwan artist Charwei Tsai's (蔡佳葳) exhibition will be presented as part of the Refugee Week and Chorus Festival of the Southbank Centre, the largest arts center in the UK.

"Hear Her Singing” takes the universal nature of song and poetry to create - an on explicitly poetic level - a platform for refugees currently living or detained in the UK. By connecting people with one another on a basic human level, the project hopes to transcend social, economic, cultural, and religious differences.

Moreover, by emphasizing common values and the simplest of human desires - that is, to be free from suffering - "Hear Her Singing” eschews political rhetoric to share and give visibility to the personal experiences of those seeking refuge.

Tsai approaches each individual with a simple request - permission to film while a person sings a song from his or her homeland. The invitation to sing or recite something relating to the past or state of mind is sometimes accepted, and the person is then filmed performing the chosen song at his or her current place of stay.

The compilation of film portraits - produced in a collaboration with Music in Detention and Women for Refugee Women - will be presented at different locations across the Southbank Centre, including as outdoor projections and public screenings.

Tsai will also host a workshop series inviting members of the local community to explore the relationship between song and space, and share their personal experiences as a way to foster deeper understanding and support for the refugee community.