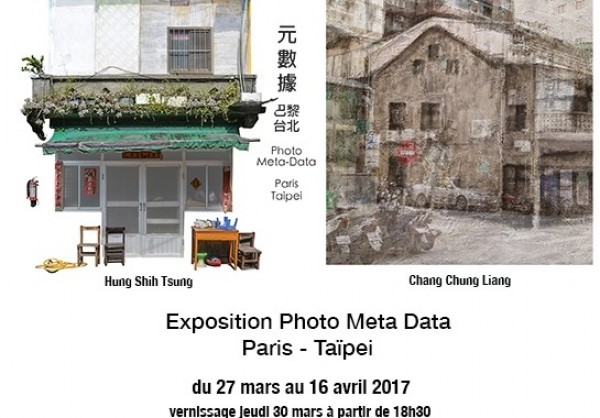 Curated by Taiwanese artist Sun Wei-shiuan (孫維瑄), the exhibition will offer insights into how the two artists explore the idea of "third person” while discovering themselves and presenting who they are from a third person's point of view.

Hung Shih-tsung (洪世聰), an interior designer, architect, and photographer whose photographic works had been showcased in numerous exhibitions, will present his digital images under the title "Meta-reflection and Transposition (Métaréflexion et transposition).”

Photographing the city landscapes of Taiwan, such as houses with colorful sheet-metal rooftops and balconies crammed with clothes and plants, Hung brings out hidden details by highlighting and adjusting shadows to present items in their original state and space.

Chang Chung-liang (張仲良), a Paris-based Taiwanese photographer, will present his observations on the everyday life and city landscapes of Taiwan and Paris through two series at the show.

Titled "Photomontage and Double Sound (Photomontage et son double),” the first series will show images taken by mobile camera that are edited with the photomontage technique and painted over to extend the meaning of the captured images.

The second series titled "Transparent Mirror Window (La fenêtre miroitée transparente)” will present the dramatic composition of privacy and transparency through the perspective of the oft-ignored window.

Additional seminars featuring the two photographers will be held at the National Institute for Art History in Paris on April 13.