The Central Naval Museum in St. Petersburg will showcase a collection of historical documents and photographs that juxtapose Taiwan in the 1870s with its contemporary visage from Feb. 15 through April 20.

The historical relics once belonged to Pavel Ibis, the first Russian marine to visit Taiwan in 1875. His photographs, manuscripts, and other relics will offer insights into Ibis' journey in Taiwan.

Photographs of Taiwan in contemporary form were taken by Russian travelers S. Malkov and F. Labutin, who embarked on a journey to Taiwan in 2014. Inspired by Ibis' story, the two travelers followed his footsteps to visit the same places, and took photos to compare Taiwan in two different eras.

The opening ceremony was hosted by Deputy Director Aleksander Chernavsky and Director Valentin Smirnov of Russia Navy Records, with more than 200 audiences joining the event.

Curator Valentin Golovache, a professor researching the historical documents left by Ibis, noted that Ibis traveled the whole island of Taiwan equipped only with a simple map and a compass.

He recorded the languages and customs of Taiwan by talking with local residents with the help of a tour guide. These records, which include illustrations penned by Ibis, were published in Russia's Sea Collection and Germany's Globus magazine in 1876.

According to Ibis' records, his tour guide didn't dare enter aboriginal territory at times. However, Ibis was often invited by tribe members to join their dinner or activities after the Russian communicated through body language. Thus, Ibis was impressed by Taiwanese hospitality, added Golovache.

Golovache also noted that the museum had showed high interest when he initially contacted them. The Central Naval Museum then helped to find Ibis' badge, the ship which Ibis served on, and information about Admiral P. P. Tyrtov, who captained the ship at that time.

Malkov and Labutin, who also attended the ceremony, shared their traveling experience in Taiwan. They were unable to always locate the same scenery and buildings as Taiwan had changed so dramatically over the past century, but they remain impressed by Taiwanese hospitality and the island's delicious fruits.

Hsu De-min (許德明), cultural division director at the Taipei Representative Office in Moscow, thanked the museum for hosting the exhibition, and hoped that the exhibition will introduce Taiwan to Russian audiences.

Established in 1709, the Central Naval Museum is one of world's oldest museums. With a collection of over 700,000 navy relics and artifacts, it is also the most well-established naval museum in the world.

The exhibition was previously showcased in 2016 at the State Museum of Oriental Art in Moscow. 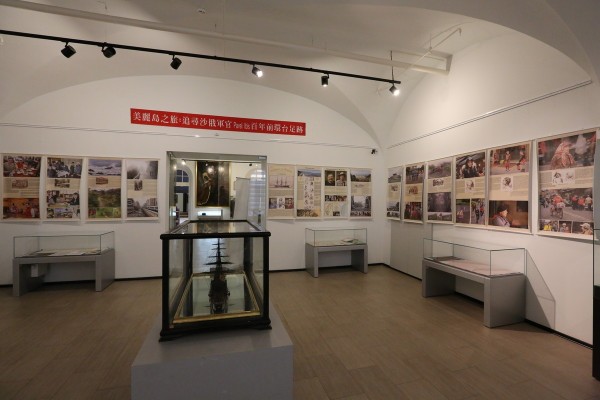