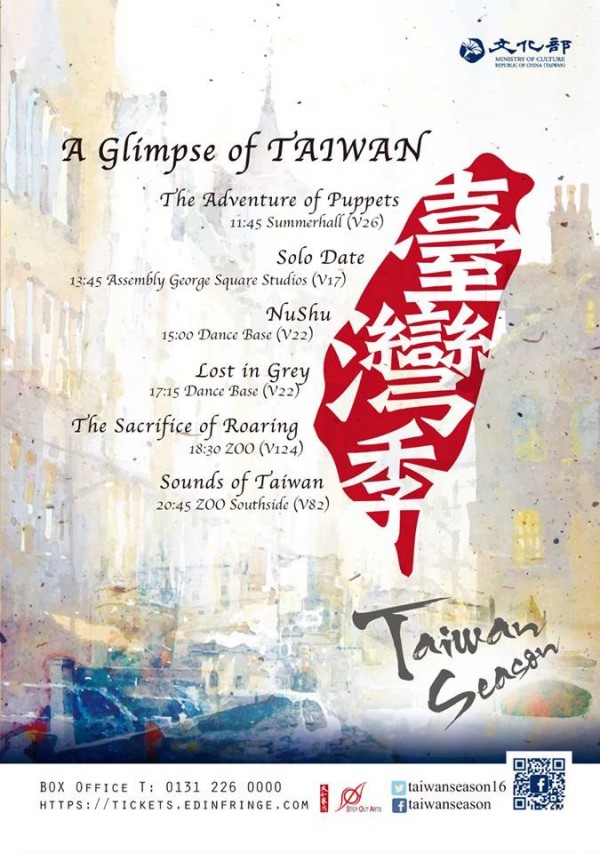 This year, a total of six performance groups will offer a glimpse of Taiwanese music, dance, theater, and puppetry in Scotland as part of the 2016 Edinburgh Festival Fringe.

Puppet Beings Theatre will bring "The Adventure of Puppets (小木偶的大冒險),” a family show guaranteed to tickle even the adults. A mop becomes a puppy, a hammer into a horse - imagination soars as the modest but charming performance offers an inventive side to life.

Tainaner Ensemble choreographer Tsai Pao-chang (蔡柏璋) will bring "SOLO DATE,” a one-man quest to reunite with his deceased lover. When resurrection fails, he vows to reconstruct her via artificial intelligence.

Water Reflection Dance Ensemble will bring "NuShu (女書),” a performance named after a coded script invented by women in Hunan Province to record their private thoughts and feelings. The dialect that was incomprehensible to men became the foundation of a subtle dance that celebrates wisdom and beauty.

Resident Island Dance Theatre will bring "Lost in Grey (時代下的灰斑),” a hard-hitting and intensely human reflection of mental health disorders in Taiwan and beyond. The use of the dancer's body as a vehicle for frantic motion, coupled with an experimental rock soundtrack, embody the complexities of human psychology.

Hsu Chen Wei Production Dance Company will bring "The Sacrifice of Roaring (禮祭),” a powerful dance inspired by Taiwanese rituals relating to morality and resurrection. Incense is burned live on stage as the dancers release all their pain at the shrine.

Wooonta Trio will bring "Sounds of Taiwan (美聲臺灣),” a blend of three unique and distinctive string instruments - erhu, sitar, and cello. The trio comprises members from Taiwan, France, and Japan and they produce music with the enticing aural flavors of several cultures.