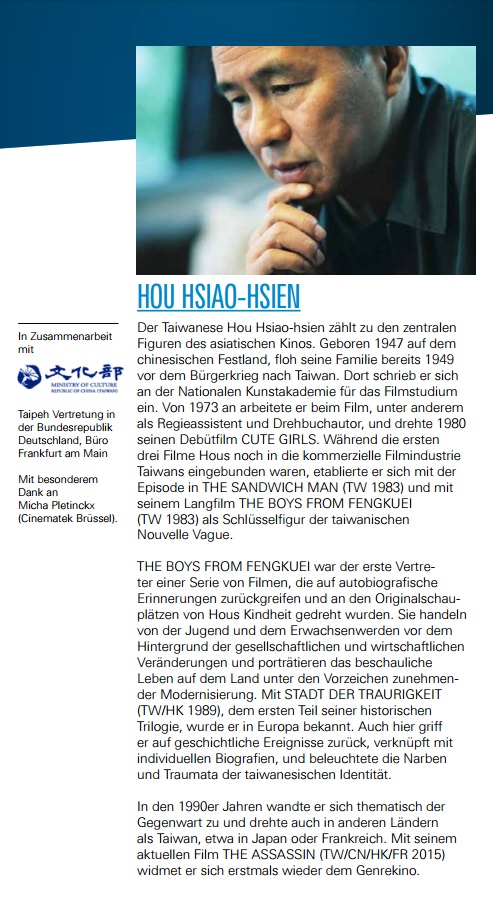 Film buffs will be remiss to miss out on a special retrospective on Taiwanese director Hou Hsiao-hsien (侯孝賢) running from March 2 through 27 at the Deutsches Filmmuseum in Frankfurt.

Co-organized by the Ministry of Culture, the retrospective will encompass eleven films directed by Hou between 1983 and 2014, and one documentary made by French filmmaker Olivier Assayas.

The lineup will include Hou's infamous - and informal - trilogies, starting with the coming-of-age trio comprising "A Summer at Grandpa's (冬冬的假期),” "A Time to Live, A Time to Die (童年往事),” and "Dust in the Wind (戀戀風塵).”

The second informal trilogy will retell Taiwanese history and repressed sentiments through "A City of Sadness (悲情城市),” "The Puppetmaster (戲夢人生),” and "Good Men, Good Women (好男好女).”

Hou classics "The Sandwich Man (兒子的大玩偶),” "The Boys From Fengkuei (風櫃來的人),” "Flowers of Shanghai (海上花),” and "Three Times (最好的時光)” will then be followed by "The Assassin (刺客聶影娘),” a sumptuous martial arts epic for which Hou was named Best Director by the 2015 Cannes Film Festival.