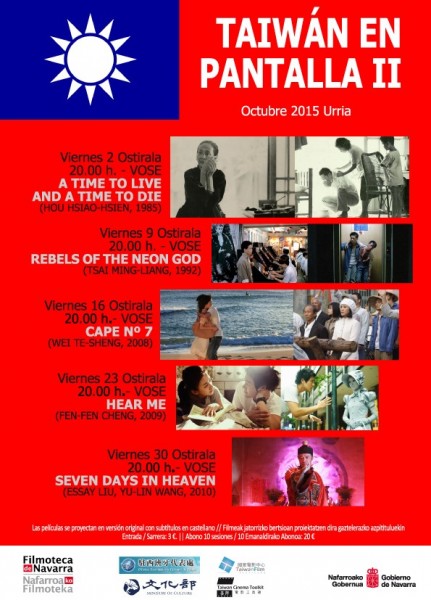 Pamplona, the northern Spanish valley best known for the Running of the Bulls festival, will pay homage to a different group of formidable forerunners - Taiwanese filmmakers - from Oct. 2 through 30.

The first wave of New Taiwanese Cinema, the first and perhaps most notable period of them all, is marked by an unabashed portrayal of Taiwanese reality in the 1980s. This breakthrough period will be represented by filmmaker Hou Hsiao-hsien's (侯孝賢) 1985 masterpiece, "A Time to Live, and A Time to Die (童年往事)” on Oct. 2.

The second wave of New Taiwanese Cinema came about in the 1990s, characterized by committed nativist perspective on contemporary society. Malaysia-born, Taiwan-based director Tsai Ming-liang (蔡明亮) will take the helm on Oct. 9 with his first feature film, "Rebels of the Neon God (青少年哪吒).”

With the onset of global competition, however, local cinema languished until the arrival of new directorial talent flavored by Taiwanese humor. Chosen to represent the renaissance of Taiwanese cinema are: 2007 blockbuster "Cape No. 7 (海角七號)” on Oct. 16; 2008 romantic comedy "Hear Me (聽說)” on Oct. 23; and 2010 family drama "Seven Days in Heaven (父後七日)” on Oct. 30.