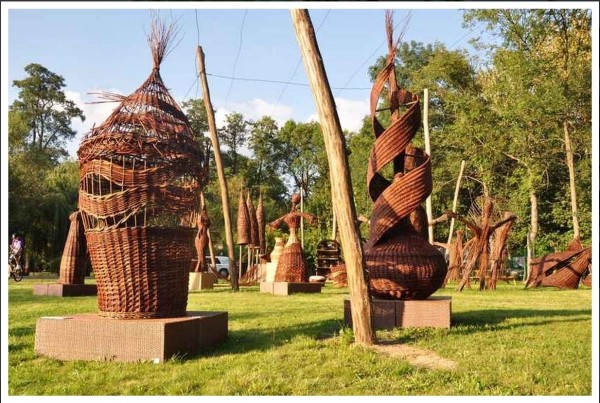 Shu Min-sheng (徐暋盛), president of the Taiwan Bamboo Arts Center, will be representing Taiwan at the 3rd World Festival of Wicker and Weaving in Poland from Aug. 21 to 23.

The world festival was launched at the Polish town of Nowy Tomysl in 2008, attracting weavers from 13 countries to join. Nowy Tomysl has a long history of basketry and wickerwork stemming from the 18th century. Its natural surroundings provide rich material sources for wicker and basket making, and the town hosts one of the largest wicker manufacturers in the world that produces even willow coffins.

The festival will begin with a two-day competition for participants, including individual and team presentations of live weaving. During the affair, visitors will witness the recreation of the vanished trade in village, in which a 19th-century Polish cart will be set up. Activities such as workshops, markets, exhibitions, and a parade will also be held.

Taiwan's participant, Shu, is a leading professional in bamboo weaving. In 1997, he joined a bamboo-weaving program hosted by the National Center for Traditional Arts, and started to develop works that are innovative without losing touch with nature. By adapting existing ideas, Shu infuses modern elements with bamboo weaving to present a diverse style of woven products.

After cultivating his skills for years, Shu began participating in national competitions and received numerous prizes. Also, his works have been showcased in exhibitions across Taiwan as Shu has transitioned from making crafts to furniture and even installation arts.

He will be joining the live-weaving show of the festival alongside 160 participants from all over the world. The international event will allow artists to exchange ideas, gain international recognition, and elevate the humble craft of weaving.

‘The 3rd World Festival of Wicker and Weaving'