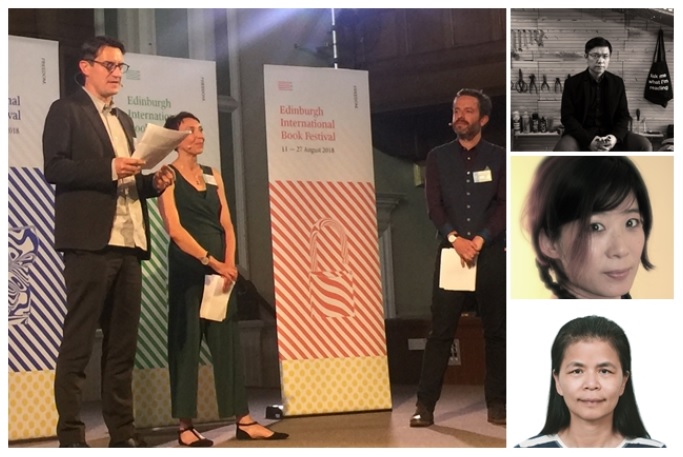 As the Edinburgh International Book Festival gets underway this August, it will feature three heavyweights of Taiwanese literature — Wu Ming-yi (吳明益), Pai Hsiao-hung (白曉紅), and Lin Man-chiu (林滿秋). The literary trio have been invited to engage in dialogue with other authors from around the world, and present to an international audience the promise and power of contemporary Taiwanese literature.

Earlier this year, Wu's novel "The Stolen Bicycle" was nominated for the Man Booker International Prize, making it the first Taiwanese novel to be up for this prestigious literary honor. In an Aug. 19 discussion with Korean-American author Mary Lynn Bracht, Wu will share with readers the historical context and geography of the novel, as well as how literature can present wars and memories.

Pai, whose past work includes writing for British newspaper The Guardian, received a "Feature of the Year" commendation from WorkWorld Media Awards in January 2008. She has long been interested in issues around undocumented migrant laborers and how Asian immigrants integrate and collide with European society. Her past English-language books include "Angry White People: Coming Face-to-Face with the British Far-right" and "Bordered Lives," and her book "Chinese Whispers: The True Story Behind Britain's Hidden Army of Labour" was shortlisted for the Orwell Prize in 2009.

This year, not only will Pai be speaking at the Edinburgh International Book Festival on Aug. 22, she will also be part of the "Freedom Papers" project, with her contribution to be published in Scottish literary magazine Gutter this August. The piece will also be available online, enabling a wider international circle to get a glimpse of the keen insights and sharp writing of this Taiwanese writer.

Four-time Golden Tripod Award-winning author of youth fiction Lin covers a wide variety of subject matter and genres, including lifestyle essays, novels for children and young adults, picture books, and even cross-cultural works. The English translation of her novel "The Ventriloquist’s Daughter" was published in the UK in 2017. At this year's Edinburgh book festival, Lin will share on Aug. 13 how she drew inspiration from her travels through South America, and how that experience led to the creation of this cross-cultural, magical realist novel.

Nick Barley, director of the festival, has remarked that the theme of the Edinburgh book festival this year is "freedom," and that he hopes that it will encourage people to explore anew the freedom of speech, thought, writing, and democracy we enjoy in today's turbulent world. The organizers, who were taken by the diversity and richness of Taiwanese literature, invited Taiwanese authors to add new perspectives to the 2018 edition of the festival, and create new opportunities for face-to-face interactions between readers and writers from around the globe.