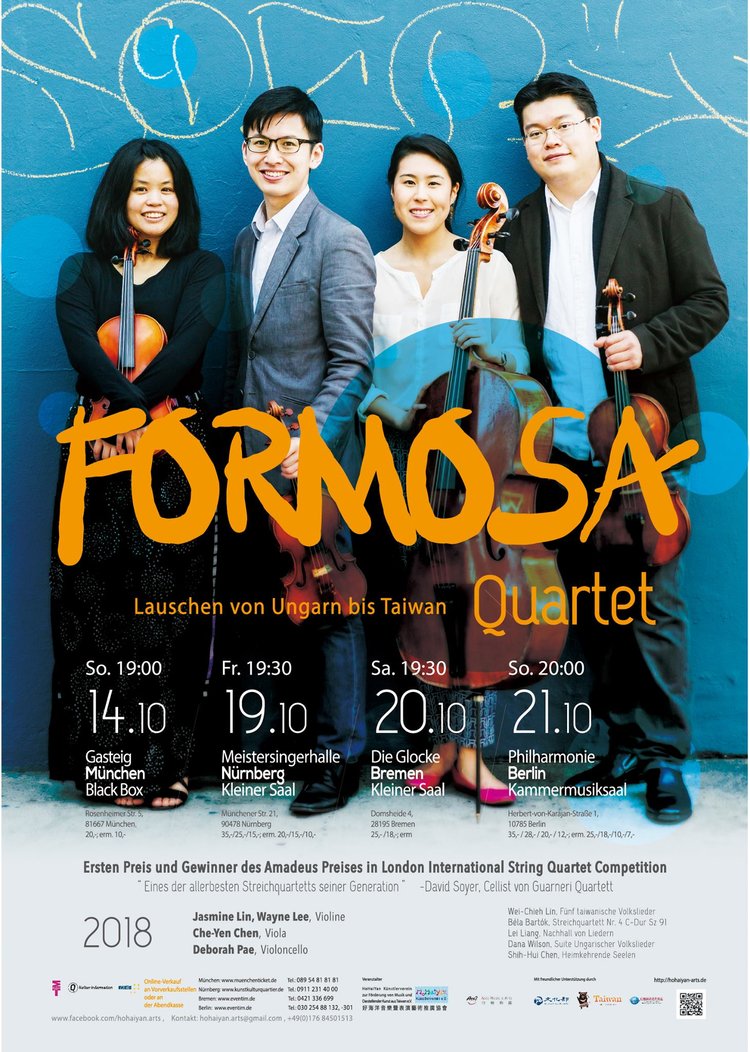 Taiwanese-American string ensemble Formosa Quartet will embark on a tour of Germany this fall and offer four folk music concerts in Munich, Nurnberg, Bremen, and Berlin from Oct. 14 through 21.

Hailed as "spellbinding" by the BBC Music Magazine and "remarkably fine" by Gramophone magazine, Formosa Quartet is deeply committed to championing Taiwanese music and promoting the arts in the land of its heritage, as well as exploring diverse and adventurous mediums for string quartet.

Formed in 2002 when the four founding members came together for a concert tour of Taiwan, Formosa Quartet plays a leading role in actively commissioning new works that contribute to the modern string quartet repertory and increase the visibility of Taiwanese and Taiwanese-American composers.

The troupe also established the annual Formosa Chamber Music Festival (FCMF) in Hualien in 2013 to bring high-level chamber music training to talented young musicians in Taiwan. The two-week festival takes place every August and is open to applicants of all nationalities from the ages of 13 through 27.

Members Jasmine Lin, Wayne Lee, Che-Yen Chen, and Deborah Pae are talented soloists in their own rights who believe in celebrating the "roundness" of cultural and geographical diversity. For the upcoming Germany tour, the quartet plans to pay tribute to the late ethnomusicologist Béla Bartók, one of the most important composers of the 20th century.

Their folk music repertoire, titled "From Hungary to Taiwan," refers to Bartók’s Hungarian roots and highlights the indigenous heritage of Taiwan. "Bunan Prayer Song," for example, is sung in an eight-part polyphony by the Bunun people as a prayer for a rewarding millet harvest.

Ticketing information and more on the Formosa Quartet's German debut can be found here, here, and here.