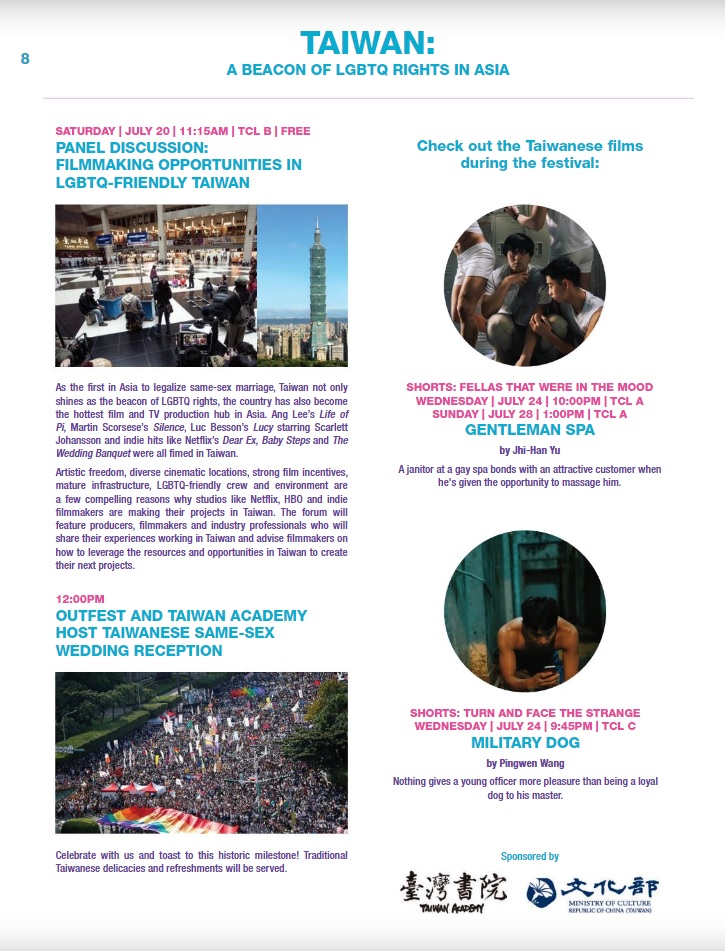 The Taiwan Academy in Los Angeles and the 2019 Outfest Los Angeles LGBTQ Film Festival will celebrate Taiwan's legalization of same-sex marriage with a series of screenings and forums on Hollywood Boulevard from July 18 through 28.

Taiwan became the first country in Asia to legalize marriage equality this May, prompting Outfest Executive Director Christopher Racster to celebrate the monumental milestone with a new selection of queer Taiwanese films. The Taiwan Academy helped organize "Spotlight on Taiwan: A Beacon of LGBTQ Rights in Asia" at Outfest last year.

"Outfest is honored to be able to continue our relationship with the Taiwan Academy and the Taiwan Ministry of Culture," stated Racster. "We are proud to be able to showcase the incredible LGBTQ films and filmmakers coming out of Taiwan. It is an auspicious moment. During the festival, we have the opportunity recognize the tremendous support that the Taiwan Academy and the Ministry of Culture have given to Outfest, and we can celebrate the incredible milestone of the legalization of same-sex marriage in Taiwan."

Artistic freedom, diverse cinematic locations, strong film incentives, mature infrastructure, LGBTQ-friendly crew, and environment are a few compelling reasons why studios like Netflix, HBO, and indie filmmakers are making their projects in Taiwan. The speakers will share their experiences working in Taiwan and consult filmmakers on how to leverage the resources and opportunities in Taiwan to create their next projects.

This year, Outfest will also showcase two bold Taiwanese short films — "Military Dog," about a young officer who derives pleasure from being his master's loyal dog, and "Gentleman Spa," about a lonely, romantic janitor who unexpectedly bonds with his massage client.