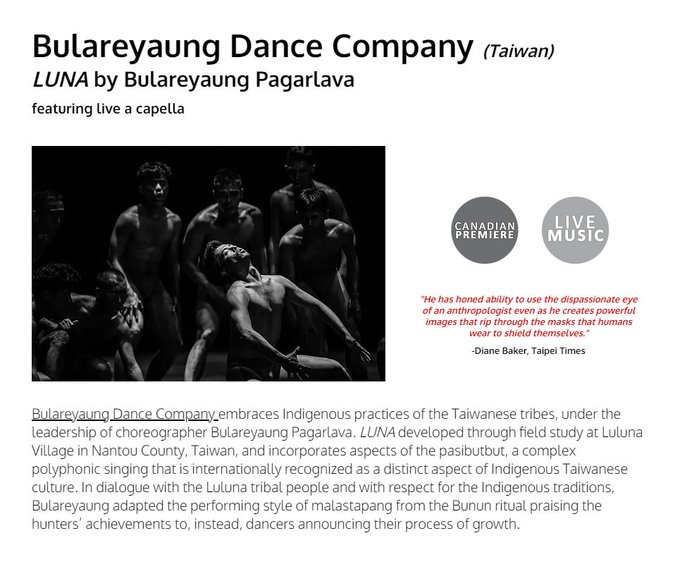 A leading indigenous dance company founded by internationally acclaimed Paiwan choreographer Bulareyaung Pagarlava will perform at the 2019 Fall for Dance North Festival in Toronto from Oct. 4 through 6. Troupe members will also greet audience members in a post-show talk on the last day of their program.

The Bulareyaung Dance Company (B.D.C) is a contemporary dance group established to discover and develop the talents of Taiwan's indigenous peoples. With aboriginal identity at the group's core, B.D.C showcases indigenous languages and physical prowess through dance and song.

Originally from the Paiwan tribe of Taiwan, Bulareyaung is a professional choreographer who worked with Cloud Gate 2 and the Martha Graham Dance Company. After achieving considerable fame in life, Bulareyaung started to focus on his identity as a member of the global indigenous community. The process of self-discovery led him to establish the Paiwan dance company in 2014 and embark on a new journey of cultivating young dancers and producing aboriginal performances.

The dance company will share the stage with aboriginal artists such as the New Zealand Dance Company, a dance piece by Canada's Northfoot Movement and Cody Berry, and Australian dancer-choreographer Jasmin Sheppard. "LUNA" will be B.D.C's contribution to the international selection of contemporary indigenous dance expressions.

Commissioned by the National Taichung Theater, "LUNA" was developed through field studies at the Luluna Village of Nantou County, Taiwan. It incorporates aspects of the pasibutbut, a complex polyphonic singing that is internationally recognized as a distinct aspect of Taiwan's indigenous heritage. To help dancers announce their process of growth, Bulareyaung also adapted a performance style known as malastapang from a traditional Bunun ritual that praises the achievement of hunters.