Duo behind ‘The Stolen Bicycle’ to greet Vancouver readers 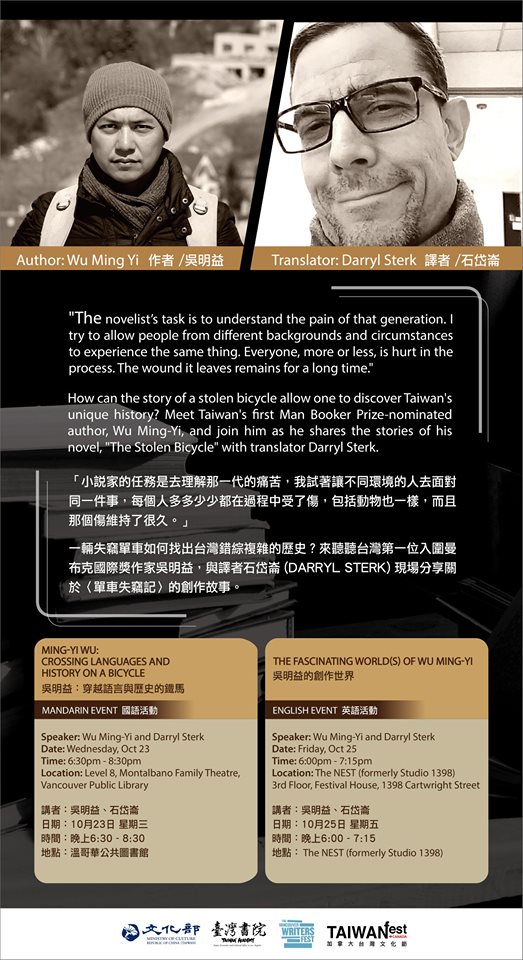 Award-winning Taiwanese novelist Wu Ming-yi (吳明益) and Edmontonian translator Darryl Sterk (石岱崙), whose collaboration on Wu's meditative and absorbing epic "The Stolen Bicycle" was longlisted for the Man Booker International Prize last year, are among the panelists invited to speak at the 2019 Vancouver Writers Fest this October.

Wu is a poet, artist, professor, and environmental activist who is widely considered the leading writer of his generation in Taiwan. His works have been translated into over ten languages and compared to that of writers such as Margaret Atwood, Haruki Murakami, David Mitchell, and Yann Martel.

Sterk is the translator of Wu's two most famous novels — "The Stolen Bicycle" and "The Man with the Compound Eyes (複眼人)." He began life as a literary translator after relocating to Taiwan about twelve years ago, and has since been published by The Taipei Chinese Pen, Balestier Press, Honford Star, and Books From Taiwan.

Wu and Sterk will join Journey Prize-shortlisted writer Anna Ling Kaye on Oct. 25 for a fascinating conversation on the real histories — both personal and national — that were woven into "The Stolen Bicycle."

The globally acclaimed, ambitious epic follows a writer who becomes immersed in strangely overlapping histories of the Japanese imperial military during World War II, Lin Wang (the oldest elephant who ever lived), and the secret network of antique bicycle collectors. The Oct. 25 event will be a stirring introduction to one of Taiwan's most ground-breaking modern talents.

Apart from two additional forums dedicated to meeting students from Simon Fraser University (Oct. 24) and the University of British Columbia (Oct. 25), Wu and Sterk will also appear in a special Mandarin-language event on Oct. 23 at the Vancouver Public Library.