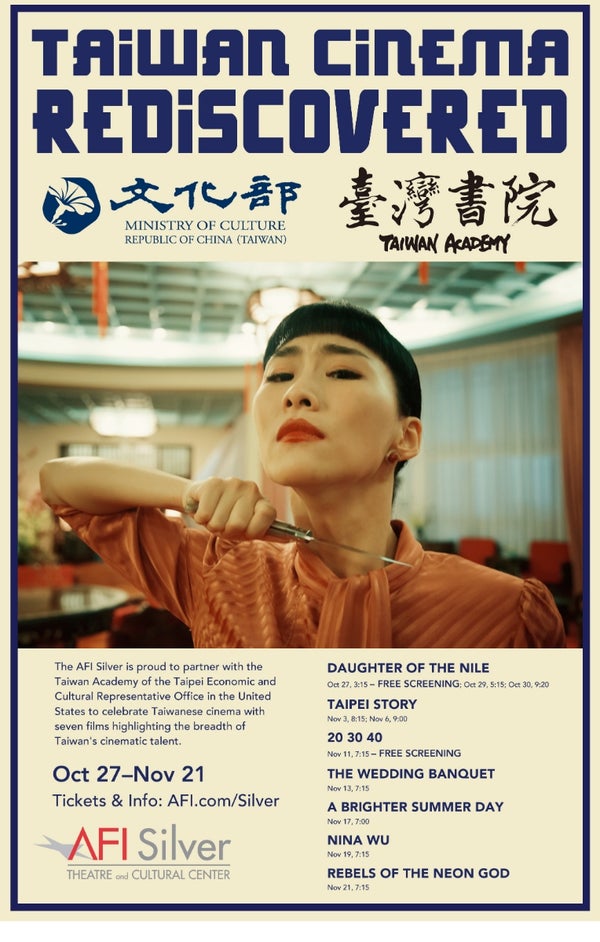 A special program titled "Taiwan Cinema Rediscovered" will be presented at the American Film Institute's AFI Silver Theatre and Cultural Center (AFI Silver) in Silver Spring, Maryland from Oct. 27 through Nov. 21 to screen seven films that highlight the breadth of Taiwan's cinematic talent.

Cinephiles can look forward to classics from the first wave of Taiwanese masters, including Hou Hsiao-hsien and Edward Yang, as well as those filmed by their successors like Tsai Ming-liang, Ang Lee, and Sylvia Chang.

"Daughter of the Nile (1987)" by Hou Hsiao-hsien follows an urban teenager who succumbs to marginalized oblivion.

"Taipei Story (1985)" by Edward Yang uses the slow dissolution of a romantic relationship to parallel the past and future development of Taipei City.

"20-30-40 (2004)" by Sylvia Chang is a personal drama on three Taipei women at three different milestone ages, distinguished by pitch-perfect performances and rare delicacy of feeling.

"A Brighter Summer Day (1991)" by Edward Yang bemoans the lack of warmth in people's hearts as mounting oppression in Taiwanese society results in murderous consequences.

"Nina Wu (2019)" by Midi Z is a psychological thriller documenting sexual harassment and trauma in the entertainment business. The script was written before the #MeToo movement took off.

"Rebels of the Neon God (1992)" by Tsai Ming-liang depicts two restless teens wandering around Taipei and their feelings of alienation in a brilliant exploration of lonely hearts.

"Taiwan Cinema Rediscovered" is supported by the Ministry of Culture's overseas branch in Washington, DC, which is better known as the Taiwan Academy of the Taipei Economic and Cultural Representative Office in the United States.