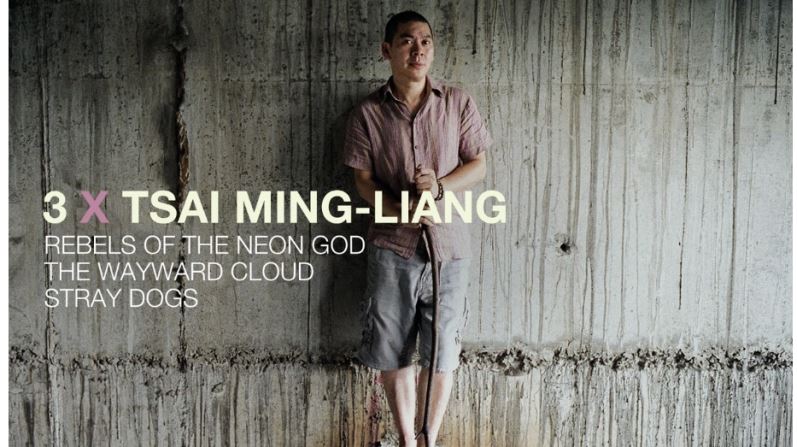 This May, the Criterion Channel unveiled three films on its platform by Taiwanese auteur Tsai Ming-liang, "the most celebrated figure of the Second New Wave of Taiwanese cinema" who charts "the contours of contemporary alienation in mesmerizingly enigmatic works that are at once rigorously spare and richly sensuous."

The specialty streaming service tailor-made for classic and art-house film fans is also presenting other legendary Taiwanese films, such as King Hu's "Dragon Inn" and "A Touch of Zen," as well as Edward Yang's "Taipei Story," "A Brighter Summer Day," and "Yi Yi."

Hu is considered the progenitor of the wuxia film genre, and his balletic fight sequences have influenced the modern wuxia blockbuster, such as Ang Lee's "Crouching Tiger, Hidden Dragon" and Zhang Yimou's "House of the Flying Daggers." Yang was another principal figure — along with Tsai and Hou Hsiao-hsien — in a new wave of Taiwanese cinema during the 1990s. He became the first Taiwanese filmmaker to be named best director by Cannes in 2000, for "Yi Yi."


All the titles and synopses are as follows:

The art of martial-arts filmmaking took a leap into bold new territory with this action-packed tale of Ming-dynasty intrigue. After having the emperor's minister of defense executed, a power-grabbing eunuch sends assassins to trail the victim’s children to a remote point on the northern Chinese border. But that bloodthirsty mission is confounded by a mysterious group of fighters who arrive on the scene, intent on delivering justice and defending the innocent. The first film King Hu made after moving to Taiwan from Hong Kong in search of more creative freedom, DRAGON INN combines rhythmic editing, meticulous choreography, and gorgeous widescreen compositions with a refinement that was new to the wuxia genre. Its blockbuster success breathed new life into a classic formula and established Hu as one of Chinese cinema’s most audacious innovators.

"Visionary" barely begins to describe this masterpiece of Chinese cinema and martial arts moviemaking. A TOUCH OF ZEN by King Hu depicts the journey of Yang, a fugitive noblewoman in disguise who seeks refuge in a remote, and allegedly haunted, village. The sanctuary she and her three companions find with a shy scholar is shattered when a nefarious swordsman uncovers her identity, pitting the five against legions of blade-wielding opponents. At once a wuxia film, the tale of a spiritual quest, and a study in human nature, A TOUCH OF ZEN is an unparalleled work in Hu's formidable career and an epic of the highest order, characterized by breathtaking action choreography, stunning widescreen landscapes, and innovative editing.

Edward Yang's second feature is a mournful anatomy of a city caught between the past and the present. Made in collaboration with Yang's fellow New Taiwan Cinema master Hsiao-hsien Hou, TAIPEI STORY chronicles the growing estrangement between a washed-up baseball player working in his family’s textile business and his girlfriend, who clings to the upward mobility of her career in property development. As the couple's dreams of marriage and emigration begin to unravel, Yang's gaze illuminates the precariousness of domestic life and the desperation of Taiwan’s globalized modernity.

Set in the early sixties in Taiwan, A BRIGHTER SUMMER DAY is based on the true story of a crime that rocked the nation. A film of both sprawling scope and tender intimacy, this novelistic, patiently observed epic centers on the gradual, inexorable fall of a young teenager from innocence to juvenile delinquency, and is set against a simmering backdrop of restless youth, rock and roll, and political turmoil.

Restored in 2009 by the Cineteca di Bologna/L'Immagine Ritrovata laboratory, in association with The Film Foundation’s World Cinema Project, the Central Motion Picture Corporation, and the Edward Yang Estate. Scan performed at Digimax laboratories in Taipei.

The extraordinary, internationally embraced YI YI (A ONE AND A TWO . . .), directed by the late Taiwanese master Edward Yang, follows a middle-class family in Taipei over the course of one year, beginning with a wedding and ending with a funeral. Whether chronicling middle-age father NJ's tentative flirtations with an old flame or precocious young son Yang-Yang's attempts at capturing reality with his beloved camera, the filmmaker deftly imbues every gorgeous frame with a compassionate clarity. Warm, sprawling, and dazzling, this intimate epic is one of the undisputed masterworks of the new century.

Rebels of the Neon God 《青少年哪吒》

Tsai Ming-liang's debut feature heralded the arrival of one of contemporary cinema's most acclaimed and idiosyncratic auteurs. The striking first expression of the Taiwanese director's recurring theme of urban alienation, REBELS OF THE NEON GOD centers on a directionless student as he becomes involved with a pair of petty criminals amid the arcades, roller rinks, and seedy hotels of the Taipei night world. Paying homage to a tradition of troubled teen pictures stretching back to Nicholas Ray, Tsai crafts a coolly stylized vision of lost youth adrift in a dead-end world.

Sex, musical numbers, and watermelons collide in the most daringly outrageous film yet from visionary director Tsai Ming-liang. In a drought-stricken Taipei where water is so scarce that people have taken to drinking watermelon juice for sustenance, a pornographic actor (Tsai regular Lee Kang-sheng) and a museum tour guide find themselves drawn together by fate—but will they ever truly connect? Punctuated by surrealist production numbers that play like MGM extravaganzas gone avant-garde, THE WAYWARD CLOUD blends high camp and genuine human feeling into a fantastically strange, singular romance.

On the margins of a crumbling, perpetually rain-soaked Taipei, a single father (Lee Kang-sheng) makes his meager living holding up an advertising placard on a traffic island in the middle of a busy highway. His children, meanwhile, wait out their days in supermarkets, living off samples of free food. And then one day, a mysterious woman enters their lives. There are real stray dogs to be fed in Tsai's everyday apocalypse, but the title also refers to its principal characters, living the cruelest of existences on the ragged edges of the modern world. STRAY DOGS is many things at once: minimal in its narrative content and syntax, as visually powerful as it is emotionally overwhelming, and bracingly pure in both its anger and its compassion.