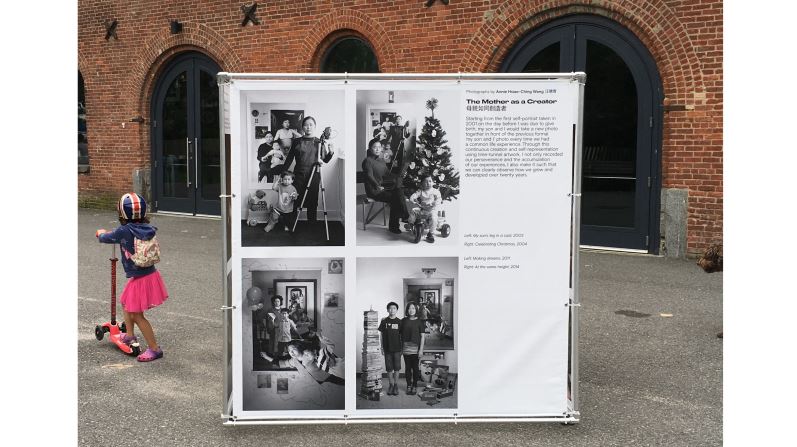 Taiwanese artist Annie Hsiao-Ching Wang's (汪曉青) photographic series "The Mother as a Creator (母親如同創造者)" has been selected for the annual Photoville Festival, a New York City-based photography festival that runs from Sept. 17 to Nov. 29.

Composed of 11 photographs shot in black and white, the series was inspired by Wang’s personal experience of becoming a mother in 2000 and it has been an ongoing project for 20 years.

In her statement on the series, Wang said she had been burdened with pregnancy pains and the fear of losing her sense of self, and so she attempted to use art creation to preserve her sense of self during motherhood. "I attempted to reconcile my role as both Mother and artist to express a complex, diverse, and creative Motherhood," the acclaimed artist explained.

While expressing her gratitude to partake in the largest and most influential photography festival in the United States, Wang said she is tremendously honored that her works will be exhibited alongside with photographs taken by internationally-known documentary photographer Donna Ferrato, whose photography is the research topic of Wang's PhD thesis.

Wang also talked about what to expect from the festival.

"Artists, who are of different generations and with unique cultural backgrounds, encounter with each other at an exhibition. From the most genuine perspective that a mother can offer, everyone stands side by side with each together, pondering how to transcend existing perceptions and challenge current circumstances facing mothers," the photographer said.

Born in Taipei in 1972, Wang received her practice-based PhD in Art from the University of Brighton in the U.K. She can be found focusing intensely year-round on issues related to the female identity, creativity, and visual culture in her artworks, according to the artist’ s website.

Together with artists from the United States, Israel, the U.K, Argentina, and the Philippines, Wang will showcase her series at an exhibition titled "A Mother’s Eye" in Brooklyn Bridge Park.

Now into its ninth year, the Photoville Festival provides a venue for photographers and audiences to engage with each other and experience thought-provoking photography from across the globe. In 2019, the annual event attracted more than 100,000 visitors.

Organized by 70 curators, this year’s festival includes more than 60 exhibitions across New York City, featuring works by more than 260 artists. Visit here to learn more about the event.